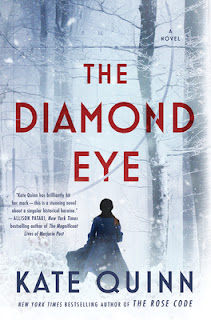 I got my dad Kate Quinn's newest book, The Diamond Eye, for his birthday this year.  After he finished reading it, he gave it to me to read as well.  I'm a big fan of her novels, so I was really looking forward to it!

The Diamond Eye is the story of Lyudmila "Mila" Pavlichenko, a USSR history student who enlists in the army when the Nazis invade her country in WWII.  It's based off the true story of Mila's life as she becomes an extraordinary sniper with an official tally of 309 kills.  In Quinn's author note at the end of the book, she explains some of the creative license she took with the story, but almost everything in the book is based off of Mila's memoir (with the very notable exception of the assassin in the US who was after FDR).

In The Diamond Eye, Mila is a young mother who is struggling to get a divorce from her older husband, who seduced and impregnated her at 15. Mila lives in Alexi's shadow - the older doctor is certain he is destined for greatness.  And though he is no longer interested in her, he doesn't want anyone else to have her, and so makes her life miserable.  When she finds that he has taken her son to a shooting range when the boy is very young, she storms over there to get him.  In the aftermath of their confrontation (Slavka heard his father say he will never be a man if she babies him so much), Mila promises that she will be as much a father for Slavka as a mother.  And that promise starts by learning how to shoot.  But after she finishes her advanced marksmen course, the Nazis invade.  Knowing that she cannot live with herself if she doesn't fight to keep her son safe, Mila enlists.  After a harrowing couple of months on the front with only a shovel, she eventually obtains her first rifle, and shows her commanding officer that she is able to shoot.  And that sets her on the path to her 309 tally kills.

The first part of The Diamond Eye tells of Mila obtaining those 309 kills.  While it was interesting to read, I admittedly felt like this was in some ways a story I had heard before from Quinn, just with different trappings (I'm specifically thinking of the Night Witches of The Huntress, where the women pilots were fighting to not only repel the Germans, but to be respected by the men around them).  Interspersed through this were passages setting up the second part of the book, where Mila was sent on a diplomatic mission to the United States as a guest of Eleanor Roosevelt.  An assassin was hired by enemies of the Roosevelts to kill the president; the assassin has decided to frame Mila in the plot to do so.  It was when these two pieces of the plot came together that the book really took off.  The end of the book was a really intense read - I didn't want to put the book down!  I also didn't see some of the things coming, which always makes for a good read (as long as the twists don't come out of left field).

I really liked the triangle that was Mila, Lyonya, and Kostia.  Lyonya and Kostia were such opposites (Lyonya had a larger than life personality, but was ridiculously kind-hearted, while Kostia was the silent and steadfast type), but they brought out the best in each other, and in Mila as well, as both her lover and her sniper partner.  I also really liked how Mila grew through the story, coming into her own in all areas of her life.  Honestly, I just really liked Mila, and wouldn't mind reading her memoir one day. :)

All in all, another excellent novel by Quinn.  I heartily recommend it. :)

Labels: historical novel, interlude, Kate Quinn
Newer Posts Older Posts Home
Subscribe to: Posts (Atom)
*As of September 24/15, I am not taking any more requests from authors to read their books. I currently have too many books to read. I'll update this if/when that changes.*