Living with Less: How to Downsize to 100 Personal Possessions 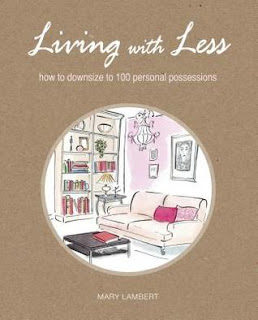 I picked up Living with Less: How to Downsize to 100 Personal Possessions at work. I'm not interested in downsizing my own life to 100 personal possessions, but I was interested in how people go about doing it themselves (and in maybe picking up some tips for how to let go of some things in my own life). I didn't realize that Mary Lambert meant "personal possessions" as clothes, electronics, sports equipment, and hobby materials only; she doesn't include things like books, dvds, or your kitchen (because those are shared things in your household, assuming you aren't single). But whatever, this fact didn't bother me as I read it.

Living with Less is very easy to read and follow along with. It has some good tips for clearing things out, but pretty much all of it comes down to "take out your garbage bags and label them "giveaway," "charity/thrift store," and "junk"; take as much time as you need to let go of things with heavy attachments; and "love it, use it, or lose it." Once you get down to your 100 personal possessions goal (which can include whole categories of things - with Lambert's method you'll end up with more than 100 individual possessions at the end), she gives some tips for tackling other areas of the home. I didn't really realize Lambert is a feng shui consultant; talk of feng shui and chi features heavily in the latter part of the book.

I think "Living with Less" is a great place to get you started with clearing out the clutter in your house (as I was reading it, I got inspired to clear out more of my stuff). But if you've more than a beginner or looking for a book on strict minimalism, you should give this book a pass.
Posted by Shauna at 9:46 AM No comments: 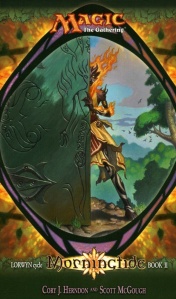 Well, Morningtide was a disappointment.  It picks up a little after Lorwyn left off.  But it picks up enough later that I found the beginning of the book super confusing.  Rhys, Ashling, Brigid, Sygg, the yew sapling (who is growing extremely fast) Maralen, and the Vendilion Clique (the trio of fairies) are together attempting to free the two giants who helped Rhys in the first book.  The giants have been captured by the Blessed and are being turned into Vineborn warriors.  After successfully rescuing the giant brothers, the party starts to splinter apart.  Ashling disappears in a flash (chasing her elemental), so the Yewling and Endry (the brother fairy) go looking for her.  Brigid wants to atone for her treachery; she intended to help Ashling, but after she disappears, she forces her company on Sygg, who she also wronged (the ferryman ends up allowing her to accompany him on his journey to find what is happening to his people).  Rhys, Maralen, the giant brothers, and the remaining two fairies seek out the giants' sister Rosheen.  They find Rosheen in a valley asleep, and manage to use the fairies to interpret her prophetic dreams.  Ashling finds herself back at her home mountain; the final part of her trial involves her getting to the peak (but she has to get through a stone giant/elemental first).

All of this stuff goes on for what feels like ever without really getting anywhere.  The narrative is split between all the parties, flitting back and forth between them within chapters.  I found that any time something started to get interesting, we'd immediately cut to something less interesting.  Everyone was trying to figure out what the heck was happening through prophecies that weren't particularly interesting (and everyone kept saying this was happening too soon, but nothing seemed to explain why that was the case).  And the characters seemed to get more boring as the book progressed (the Vendilion clique was boring listening to Maralen....and there was a lot less of the two sisters through the book.  Plus Rhys was pretty boring in this book - half of his actions were seen through the eyes of the Blessed who were hunting him, so we didn't even get to see him really in action until he was getting the snot kicked out of him at the end.  And I still don't really know what the heck Maralen is, nor do I really care.).  Morningtide was a real struggle to get through; I have no intention of reading Eventide after slogging through this book.  And I'm especially disappointed because I loved the idea of this setting, but these books just didn't really live up to what I was expecting of them.
Posted by Shauna at 12:42 AM No comments: 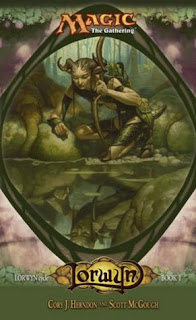 It took me a bit to warm up to this story and the characters, but by the end I found I was quite interested in what happens.  Book 2, Morningtide, is a direct continuation of the story, so I'm excited to read it next (especially people seem to say it is a lot better than Lorwyn)!
Posted by Shauna at 12:45 PM No comments:

Labels: Cory J. Herndon, fantasy, Lorwyn, Magic: the Gathering, Scott McGough
Newer Posts Older Posts Home
Subscribe to: Posts (Atom)
*As of September 24/15, I am not taking any more requests from authors to read their books. I currently have too many books to read. I'll update this if/when that changes.*