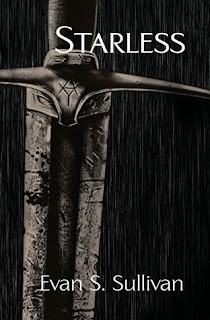 Starless is a short fantasy novella by Evan S. Sullivan telling the story of Calan Castillon. It goes back and forth between his youth and ten years later when he is part of an invasion to another land.  The other land, Cavadere, invaded their lands during his youth and Calan's father was killed during the war to repel the invaders.  Now the kingdoms who were invaded have created their own great fleet and strike out to conquer the enemy who invaded them.  Calan was sent to honour his family's alliance with another kingdom, and Calan is incredibly resentful that his family abandoned him like that.

I had a really hard time connecting with Calan.  Some of the things that happened, particularly in his youth, seemed really weird to me (I'm not positive how old he was, but he was able to wander around his city freely without an escort around the age of 8 or 9, and he's the nephew of the king).  He didn't seem to understand how alliances work even though the book said he had political training once he was a bit older.  And he was kind of just generally sullen, unlikable, and not particularly useful in the events of the story (his commanding officer disliked him and I actually found myself agreeing with the commander because through the early parts of the story, Calan was mainly standing around and doing nothing - though I will concede that this part of the story took place on a boat, and Calan says he has had no experience on one before).

Starless is a fairly short read (about 110 pages).  I mention this because it felt like the story actually started around page 70 or so.  Most of the things that happened before that were backstory that wasn't particularly needed; with the story coming from Calan's perspective alone, we could have taken his word on what he was feeling towards everyone else, particularly in his family, without the events needing to be shown.  Even the events that fueled his nightmares weren't particularly needed for the narrative itself.

I did find the ending of the book to be interesting though.  I admit that I clued in on what was most likely going to happen around page 70, but was still curious to see how it all unfolded and why.  Calan reminded me of Arthas from Warcraft III in many regards with what happened in Starless, though their stories are by no means the same.

I was also intrigued by many of the other characters surrounding Calan.  His cousins seemed particularly interesting (the princess heir to the throne who can apparently best two grown men/knights with a sword, and her younger brother who just wants to be a musician, not a prince) and it was a shame that this story didn't show more of them.  I also wish the differences between the kingdoms had been explored in more detail (why do the women of the South get to use swords when the women of the North don't?), although I do understand there wasn't space for such things within Calan's narrative.  I am hopeful that more of these characters and cultural differences will be explored in Deathless, Sullivan's new novel that I believe is set in the same world as Starless.

I'd also like to mention that the list of characters really came in handy when I started reading Starless, particularly in terms of the Castillon family (the king, his son, and his brother all have names starting with "R," so it took a bit to figure out who was who).  I do wish there had been a map though to show the different kingdoms, particularly while trying to follow the events of the war. I firmly believe that fantasy books should all have maps to help the reader follow along.

Posted by Shauna at 8:40 PM No comments: 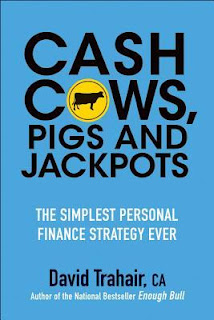 I picked up David Trahair's Cash Cows, Pigs and Jackpots: the Simplest Personal Finance Strategy Ever at the library the other day.  It's been awhile since I've read a personal finance book, and this one sounded interesting.  It's also Canadian, which is more relevant for me than American personal finance books, so that was a definite plus.

I thought I'd be in for some fun tales about get rich quick schemes.  Or something more akin to JL Collins' The Simple Path to Wealth.  Instead, Cash Cows, Pigs and Jackpots ended up a fairly basic personal finance book with only one main message: spend less than you make.  While important (but not exactly earth-shattering) advice, that's not really a strategy per se.  I've read other books (that I've liked better - check out some of the other personal finance books I've read) that give more details and strategies on how to pay down your debts, and more fun anecdotes from other people taking control of their finances.

Beyond that, Trahair looks at two important aspects of your personal finance: the question of buying or renting a place to live, and retirement.  I found that the first discussion got bogged down by him walking you through a spreadsheet he made to help you decide on whether renting or buying is better for you (and since I'm not actively interested in that question at the moment, I wasn't really engaged by it).  But I did find the discussion on condos interesting, just in terms of the other fees you need to consider when deciding whether buying one is right for you.

The retirement discussion mainly focussed around CPP and OAS here in Canada.  While I was glad to hear that these are healthy and will be around for awhile (particularly CPP), most of the discussion was tied to the specifics of the "new" rules rolled out around 2012.  Being 10 years out of date at the time of my reading it, I didn't care at all about these specifics, and so lost interest once again.

All in all, I didn't find Cash Cows, Pigs and Jackpots to be a very engaging read.  I would have preferred less focus on the date specific numbers (and honestly less focus on hard numbers in general), and more focus on stories of people (there was one story in chapter four that was really interesting - I would have liked to read more of that in the book!)

Posted by Shauna at 2:02 AM No comments:

The Secret History of the Mongol Queens: How the Daughters of Genghis Khan Rescued His Empire 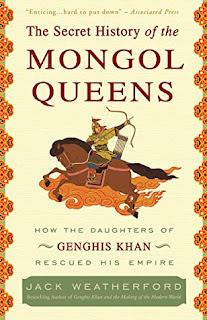 I picked up The Secret History of the Mongol Queens: How the Daughters of Genghis Khan Rescued His Empire by Jack Weatherford a few years ago, on a whim.  I don't know a whole lot about Mongolia or Genghis Khan, but I was intrigued that his daughters might have had a hand in saving the empire he built.

The Secret History of the Mongol Queens is split into three parts.  The first part was centered around Genghis Khan himself, showing how he built his empire and why his daughters played such an important part in it (he had been betrayed by many men throughout his life, and he needed someone he could trust running things while he took the men off to war).  I found this part quite fascinating, especially with just how much power he gave his daughters.

The second part was, in my opinion, the hardest one to get through. This showed how, after his death, the men of his clan undermined and stole power from the women.  There are some very dark events covered in this section (I'm not going to lie - a few events I wish I could go back to not knowing about - hopefully they will fade from my memory soon). But there were some really interesting people in this section, like Qaidu Khan and his daughter, Khutulun.  Khutulun was a fierce warrior, and she vowed to only marry a man who could beat her at wrestling.  While she did end up marrying someone eventually (in the wake of rumours that spread about her and her father having some sort of incestuous relationship), she was undefeated in wrestling!

The final section was about Manduhai and Dayan Khan.  Manduhai ended up a queen put in an almost impossible situation after her husband passed away, because whoever married her would become the next Khan.  But rather than marrying one of the three obvious contenders, she forged her own path by engaging herself to a child who was the final male heir of Genghis Khan.  And rather than using him as most others might have, she ensured that he grew up to be a strong and wise leader, making sure that he was always along when she brought the Mongols to war.  Together, the two of them reunited the shattered empire of Genghis Khan for good, while also ensuring that the surrounding countries understood that they had no interest in conquering more territory - the Mongols had learned that it was hard to administer a vast Empire. Though there was about 20 years between them, Manduhai and Dayan Khan stayed together until her death; neither of them took another spouse or tried to depose of the other (although they very easily could have gone their separate ways once Dayan Khan was 18).

While overall The Secret History of the Mongol Queens was an interesting book, I did find the writing to be a bit dry at times.  I also thought it would have benefitted from a lot more supplemental material, especially lineages.  I found I had a really hard time keeping people straight, particularly in the second section of the book where it moved quite quickly from person to person.  This was also the section that did not have any family tree at all when it began.

I'd also like to mention the really neat calligraphy drawings at the beginning of each section.  I didn't realize that's what they were until I read the Acknowledgements page - they are by N. Bat-Erdene, and they depict three of the Mongol Queens (Borte, Sorkhokhtani, and Manduhai). According to Weatherford's note, the Mongol people believe the essence of a person survives in the sound of the spoken name and the form of the written one, hence why these drawings are particularly important.  He also notes that no portraits of these ladies are known to exist.  Very, very interesting!

Posted by Shauna at 9:23 PM No comments:

Labels: Genghis Khan, history, Jack Weatherford, Mongolia
Newer Posts Older Posts Home
Subscribe to: Posts (Atom)
*As of September 24/15, I am not taking any more requests from authors to read their books. I currently have too many books to read. I'll update this if/when that changes.*