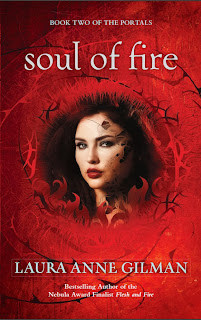 So after reading Laura Anne Gilman's Heart of Briar, I couldn't wait for the sequel, Soul of Fire.  I preordered it on my Kindle, and was super excited to get the book a week earlier than expected from Amazon.  I dove right into the story, eager to see what happened to Jan and company.

I have to say, I was rather disappointed in Gilman's Soul of Fire. Having finished it, it reminded me of the way I felt after reading Philip Pullman's The Subtle Knife: at the end of The Golden Compass, Pullman could take the story literally anywhere.  Unfortunately the place he chose to go with it was so boring I was extremely disappointed.  While Gilman wasn't in the same boat as that (Heart of Briar wasn't nearly as open-ended as The Golden Compass), I still feel very unsatisfied with how the story played out.

I'm going to give a spoiler alert here.  I want to talk about this book in more detail.

A good part of the problem, in my opinion, with Soul of Fire was similar to my issue in Matt Forbeck's Brave New World: Revelation.  There were a lot of characters introduced, many of whom were minor characters, making it hard to keep track of who was who, especially when supernatural creature names were thrown into the mix, often without a real explanation of what they looked like.  To make this even worse, many of these minor characters were killed off (like the cops who went missing), reminding me an awful lot of Darth Maul, Shadow Hunter by Michael Reaves (which is not a book you want to be reminding me of).
With a whole mass of characters, it is hard to give the ones I actually cared about (mainly Jan and Martin) enough screen time.  On top of that, it took a while for Jan to actually start doing something (reminding me of Katniss' daze in Mockingjay, even though she wasn't actually dazed).  And then when she, Martin and Tyler go off against AJ's express orders, they end up hanging out with the missing Preternatural Queen for awhile while almost everyone else seemed to be doing more.  Now don't get me wrong, the Queen was interesting, but overall this part of the book seemed to slog on.

The book ended with a couple of big fights (which Jan was mostly not a part of because she doesn't really fight), then with the Queen agreeing to go back to her Court.  The book kept insisting that there needed to be a balance between the Preternaturals and the Earthlings, so the Queen pretty much just left with little fuss in order to restore the natural order of things.  After that, a shell-shocked Jan is left trying to move on with her life as best she can.  All in all, this wasn't a very satisfying ending.  Especially since Jan didn't end up with either Tyler or Martin.  Yes, I was biased; this novel was published by the Harlequin Luna Books imprint, so I was expecting something a bit more than "well, Tyler left.  The end."  (And yes, I realize ending up with a kelpie might not be great news for Jan, but Martin did seem to be a love interest of sorts.  And one who was interesting and really seemed to like her.  I won't lie, I was hoping they'd end up together).

So yes, I found Soul of Fire rather disappointing.  Which is too bad, because I like the world, many of the characters, and the creatures who inhabit Gilman's Portals duology.
Posted by Shauna at 1:41 AM No comments: 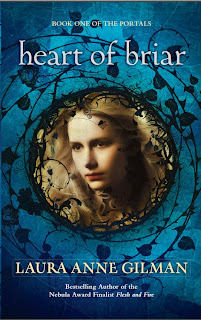 When I was at work, a lady brought back several fantasy novels. Laura Anne Gilman's Heart of Briar caught my eye, so I took it home and started reading.

Heart of Briar is the story of Jan. Her boyfriend, Tyler, goes missing and she sets out to find him. But the supernatural world finds her first. AJ, a lupin, and Martin, a kelpie, save her from a gnome's attack. It is they who inform her that Tyler was taking by elves, preternatural (not from our world) beings who periodically steal humans. The gnome was sent to kill her because Jan, Tyler's lover (or leman, as they say), is the only one who can possibly save him.

To make matters worse, the preternaturals are coming much more often now; they've found some way to open their portals wherever and whenever they want. AJ and the other supernatural need Jan's help to discover how they're doing so (and hopefully find a way to stop them).

With Martin's help (despite the fact that he is a kelpie), Jan attempts to trap the prefers in their own game (they're using internet dating sites to snare their prey). But time is running out for Tyler.

Heart of Briar is unfortunately the first book in a series. And the second book isn't out yet. But I really did enjoy reading it, and can't wait till the use one one comes out on Kindle (I pre-ordered it).
Posted by Shauna at 12:58 AM No comments: 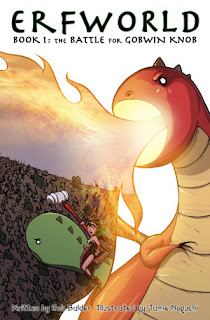 A friend of mine lent me Erfworld, Book 1: The Battle for Gobwin Knob.  I had absolutely no idea what I was in for.

Erfworld is the story of Parson Gotti (aka Lord Hamster), a game master from our world who is summoned to Erfworld.  There he is designated the Chief Warlord of Stanley the Tool.  Parson has to defend the Tool's last remaining city against an army that outnumbers them by 10 (or more accurately 25) to 1.

Erfworld is an interesting place, full of gwiffons and dwagons and the like.  The world itself is like a giant strategy game, where everyone has a stat associated with them (which the warlords and royalty can see).  Parson needs to learn the system's rules quickly in order to exploit every thing he can to keep his side alive.

Erfworld: the Battle for Gobwin Knob is a quirky read, poking fun at gaming.  I don't have a whole lot to say about it, but I did enjoy reading it.
Posted by Shauna at 12:51 AM No comments:

Labels: Erfworld, graphic novel, interlude, Jamie Noguchi, Rob Balder
Newer Posts Older Posts Home
Subscribe to: Posts (Atom)
*As of September 24/15, I am not taking any more requests from authors to read their books. I currently have too many books to read. I'll update this if/when that changes.*