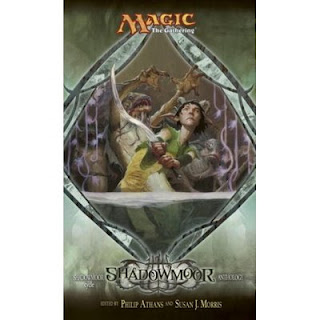 It's taken me awhile (I read the first story back in March), but today I finally finished the Magic:the Gathering Shadowmoor Anthology! And I have to say I really liked it! Right off the bat I was enchanted with the land of Shadowmoor, from the treefolk and giants to the merrows and elves. I liked that there were no humans present. It, and Lorwyn (the sunny, happier Shadowmoor), reminded me of a fairy tale land and I liked that. But if Lorwyn is the happier side of the coin, Shadowmoor is the dark, Brother's Grimm fairy tales. Almost all of the tales in this anthology are darker, and many have twists that end in death, destruction and suffering.
There were nine stories in total, most by authors I am unfamiliar with (unless they wrote stories in some of the other Magic anthologies I have read). Out of the nine stories, I really enjoyed five of them, and thought another three were alright. It was only "Expedition," the story about the kithkin doun trying to teach fear to one of its members, that I really didn't like. Shadowmoor was a great read, and I wish Wizards of the Coast would continue to tell tales from this dark land (and its sunnier counterpart).
Posted by Shauna at 4:04 PM No comments: 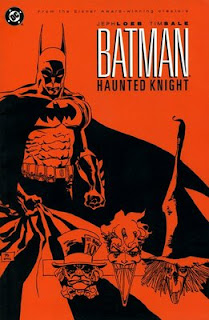 After finishing Dalamar the Dark, I knew I needed something fast and good to read. So I decided to give one of the three Batman graphic novels by Jeph Loeb that I bought in Toronto a try. I arbitrarily chose Batman: Haunted Knight because it looked like it was the shortest of the three.
Haunted Knight is a collection of three Batman Halloween specials by Loeb and Tim Sale. The first story features the Scarecrow rampaging through Gotham during Batman's early days. Batman becomes torn between his duty of stopping the Scarecrow and his personal wants when he meets a beautiful girl at a Halloween party.
The second story features the Mad Hatter's twisted scheme based off of Alice in Wonderland. He kidnaps children in an attempt to reenact the novel. While Batman is on his tail, the Hatter makes it more personal for Commissioner Gordon when his daughter is kidnapped by the madman.
The final story is a Halloween version of A Christmas Carol. Batman is visited first by the ghost of his father and then by three spirits who wear the guises of various villains and Death.
All three stories were excellent! I felt like I devoured the book, it was so good!
Posted by Shauna at 1:28 AM No comments: 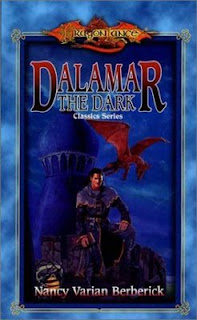 Although I enjoy reading fantasy novels, I do not normally concern myself with the magic of a world, including its mages. This is especially true of the fantasy lands such as Dragonlance, where the system runs off of a pantheon of Gods in much the same manner as Dungeons and Dragons. That said, I am a fan of Nancy Varian Berberick's books, and so I was willing to give Dalamar the Dark a try.
Dalamar the Dark tells the story of a servant elf who was born with a lot of magical talent. He was taught only a little bit and very grudgingly by the Silvanesti Elves who practice good magic, and so he taught himself black magic in secret. When war threatens his homeland, the elves must flee their homeland. Once they return, Dalamar is caught and exiled from Silvanesti forever for worshipping the dark gods. Dalamar then goes on to fulfil his destiny as a dark elf.
While this book sounded like a lot of fun, it was a very ponderous read. From the beginning, it seemed hard to follow, jumping around all over the place with no real consistency. This wasn't helped by the fact that it's been a long time since I've read any Dragonlance novels, and so could not remember what happened in the world (Dalamar the Dark parallels the story from the Dragonlance Chronicles series). But even after it stopped jumping from person to person, it just never made me want to read it. Picking the book up was a struggle, and so was reading more than about five pages. While the ending was alright, it never seemed worth the struggle to get there. As a fan of Berberick's work, Dalamar the Dark was a huge disappointment, and I do not recommend it to anyone. There are many better books out there, both in the Dragonlance series and by Berberick.
Posted by Shauna at 4:19 PM No comments:

Labels: Dragonlance, fantasy, Nancy Varian Berberick
Newer Posts Older Posts Home
Subscribe to: Posts (Atom)
*As of September 24/15, I am not taking any more requests from authors to read their books. I currently have too many books to read. I'll update this if/when that changes.*