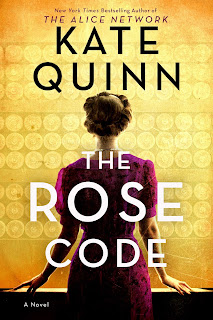 The Rose Code is Kate Quinn's latest book.  This time she tackles Bletchley Park and the Enigma Machine.  When I heard that's the setting for this newest book, I knew it was perfect for my dad.  Once he was finished reading it (he loved it!) he passed it on to me. I wasn't familiar with much about the Enigma Machine and Bletchley Park, so I wasn't sure what I would think of it, but I trust Quinn's writing and was very happy to give this one a read!

The Rose Code is the story of three girls who end up working at Bletchley in various capacities: Osla, a socialite who wants to make a difference and prove to the world that she isn't just a silly deb, Mab, a girl who has been trying to better herself to snag a better life, and Beth, a timid girl who has been terrorized by her mother all her life.  It follows the three through the ebbs and flows of their friendship during the war years and beyond, through heartbreak, betrayal, and redemption.

I really enjoyed the mix of personalities here (Quinn's books have all had fantastic characters!) Osla was a super bubbly person whom everyone underestimated because all the men just thought she was air headed and silly.  She's based off a real person, whom a good many things that happen in the book happened to (just not the bombing she survived in a London night club).  I loved her relationship with Prince Philip and was super sad when it ended (even though I knew the outcome, both from real life, and from the very beginning of the book).

Beth was also based off of real people (two ladies, rather than just one).  She's quite the interesting character - she's shy and naive, while also extremely cold at times (while it's never said, I believe she is on the autistic spectrum).  She was always mentally beaten down by her mom, so it was great to see her grow into her own (and realize that she is, in fact, brilliant at code breaking).  The book goes back and forth between Bletchley and about two years later, when she's in a mental asylum trying to escape, so a good chunk of the book had me wondering what had happened to her for her to end up here when she was very much sane?

Many of the other characters in the book are either real people (like Alan Turing), or based off of real people (like Giles and Harry).  But Mab is fictional, created in honour of the many women who helped keep Bletchley running.  I loved Mab: she knew what she wanted and wasn't afraid to work to get it.

Oh, there was also a cameo by Ian Graham from The Huntress.  I was surprised I recognized him in it (I vaguely remembered him being a war correspondent, then confirmed it was him when I read a synopsis of The Huntress).  Very fun nod for people who have read her other books! ;)

While reading The Rose Code, I will admit that I saw some stuff coming before it was revealed, like the truth about Mab's relationship with Lucy, and what was going to happen to Francis. But it was okay - even knowing things were coming, they were still massively impactful as they unfolded.  Also (and importantly), the book kept me guessing about who the traitor might be right to the end, so that was great, being blindsided by it.  Quinn masterfully fed in how the traitor got information as well - when it was revealed, I realized I as the reader had fallen for their tricks as well!

The Rose Code was another fantastic WWII era by Quinn.  I look forward to her next book, whatever it might be!

Posted by Shauna at 6:32 PM No comments: 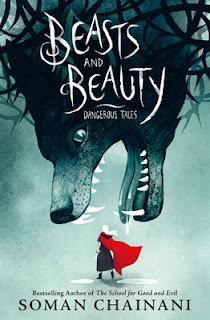 I saw Soman Chainani's Beasts and Beauty: Dangerous Tales at the library and was absolutely intrigued by the first lines of several of the stories.  Like "Red Riding Hood's" "On the first day of spring, the wolves eat the prettiest girl."  Or "Sleeping Beauty's" "To the prince, it was clear: demons were drinking his blood."  How can you not want to know more with lines like these???

Beasts and Beauty is a book of fairy tale retellings.  It includes twelve stories, ranging from the regulars like "Sleeping Beauty," "Beauty and the Beast," and "Snow White," to some lesser known ones like "Bluebeard."  Chainani plays with everything in these stories, moving them to different cultures, and playing with characters' sexuality.  The stories are also rather dark, feeling more in line with the originals rather than the more cleaned up modern versions.  All in all, it makes for a very interesting collection of stories.  And it's a fairly easy read - I blew through the entire book in less than a day.

I really like how a lot of the stories center on making your own way, how you can't wait for your prince to come and save you.  They also point out many of the negative (and often damaging) tropes of the originals before charting a new path.

I think my favourite was the "Peter Pan" retelling.  It reminded me in a lot of ways of Brom's retelling which I read some years ago (although the two stories are very different).  This story was also different from the others in the collection in that it was written as a letter, while the others are written more like classic fairy tales.

If you enjoy fairy tales and fairy tale retellings, definitely give Beasts and Beauty a try!

Posted by Shauna at 2:05 PM No comments: 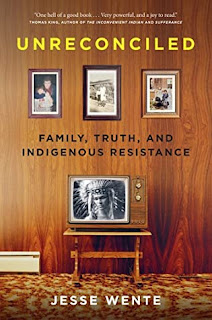 For September 30th, the very first National Day of Truth and Reconciliation here in Canada, I wanted to read a book that would further my understanding of Indigenous issues here in Canada in some way.  I wasn't sure exactly what I was looking for (and was open to books on everything from culture to residential schools), but while looking over books online I found Jesse Wente's Unreconciled: Family, Truth, and Indigenous Resistance.  It was brand new and already well rated, so I decided that it would be the book I read this year on this day.

I wasn't familiar with Jesse Wente prior to reading this book, which is both his memoir and manifesto, but he is an Indigenous journalist and film critic who has had a very successful career in Canadian media.  In Unreconciled, he talks very frankly about how the residential school system damaged his family, making him and other members of his family feel like outsiders when they visit their family who still live on-res at Serpent River First Nations.

He also talks at length at how there are so few people of Indigenous descent working in the media.  How Indigenous stories are so often co-opted by white people, put through a white lens and profited off of.  And how people from minorities are often made to speak for their entire group, and how there is tremendous pressure to succeed if you break through into an area because you do not want the door to close for everyone else should you fail.  Or how people of minorities, himself included, can be reduced to tokenism, standing in for their entire group, or, far uglier, being co-opted by institutions and businesses as a kind of endorsement, even if you don't actually endorse what they're selling.

While at times difficult to read, I thoroughly enjoyed Unreconciled. Wente infuses the book with humour while still showing us how Canada as a country has failed, and encouraging us all to do better.  Unreconciled is definitely a book I recommend to all Canadians, for it speaks the truth, which goes hand in hand with reconciliation.

Posted by Shauna at 6:13 PM No comments:

Labels: Jesse Wente, Kindle, memoir, nonfiction
Newer Posts Older Posts Home
Subscribe to: Posts (Atom)
*As of September 24/15, I am not taking any more requests from authors to read their books. I currently have too many books to read. I'll update this if/when that changes.*