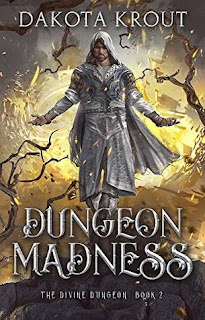 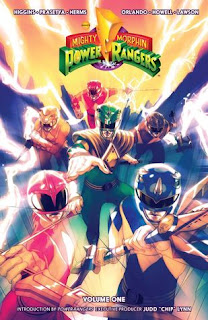 Oh my gosh, where to begin?  I snagged these three volumes from the library a little while ago and finally sat down to read them today (I was going to start them on the weekend but that didn't happen).

The story starts basically where "Green with Evil" ends.  Tommy is free of Rita Repulsa's mind control and has joined the Power Rangers.  But he is dealing with the aftermath (kind of PTSD) of having been controlled by her.  He's seeing her everywhere and she keeps telling him that he's nothing without him, making him seriously second guess himself (and also freeze up in battle).  At the same time, the other Rangers are having a hard time adjusting to him being on the team as well.  They worked well together just the five of them, so now the dynamic has changed.  Plus they don't all know if they can trust him, since he was hand-picked by Rita to be her second in command.

Meanwhile Rita has a new trick up her sleeve.  She's tasked Scorpina with powering up a mysterious crystal with green chaos energy.  Once fully powered, it will open a gateway and let the mysterious black dragon through. 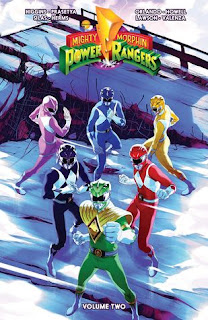 Volume 2 is the Rangers' battle against the Black Dragon.  Whoever this mysterious person is, he can disrupt most of the Rangers' connection to the Morphin Grid - only Tommy still has access to his powers because he accesses it a little differently from the others.  With the Command Centre destroyed, and both Zordon and Alpha 5 unresponsive, the Rangers flee, but the Black Dragon manages to get Billy before he can teleport away, and uses his Power Coin to take control of the Zords.  Rita sets herself up in the remains of the Command Centre and tells the nations of Earth they have 24 hours to bow down to her or she will destroy them. 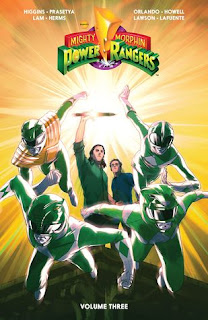 And Volume 3 has the aftermath: Tommy and Billy are missing.  They were brought to the Black Dragon's world when he was defeated.  I was super excited by this because the opening shot of the world showed me exactly who the Black Dragon is (later confirmed in the story).  Billy and Tommy awaken Saba, just as the Dragon finds them to welcome them to his world.  Saba activates a few Zords to help them flee and they make their way to the camp of the Rebels who are fighting the Dragon.

Unfortunately that's where the story left off.  Each volume has been directly continuing into the next one, so I'll have to wait to see what happens next! :(

Oh, each volume also has a hilarious little side story at the end with the adventures of Bulk and Skull.  Bulk is determined that the two of them can be better heroes than the Power Rangers, and that's led them into some hilarious antics.

All in all, these have been fantastic reads.  I really can't wait to get my hands on volume 4!

Posted by Shauna at 1:13 AM No comments:

To Touch a Wild Dolphin: A Journey of Discovery with the Sea's Most Intelligent Creatures 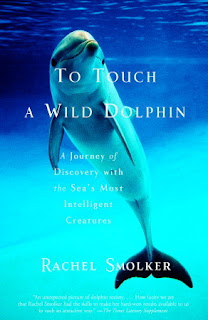 I don't remember why I bought Rachel Smolker's To Touch a Wild Dolphin: A Journey of Discovery with the Sea's Most Intelligent Creatures, but I remember buying it a long time ago.  I recently discovered it hidden in a cupboard in my basement, and decided that now is the perfect time to finally give it a read.

To Touch a Wild Dolphin is all about Smolker's days researching wild dolphins at Monkey Mia, a remote place in Australia where wild dolphins were interacting with people.  Over the course of about fifteen years, Smolker and her fellow researchers were able to get to know the resident dolphins and learn so much about them as a species.

I really enjoyed when Smolker was talking about the dolphins and the things they discovered, particularly about their social lives.  Very interesting stuff.  I had a much harder time getting through the chapters that weren't focused on the dolphins though.  I was okay with the first few, which detailed Smolker getting to Australia.  But there was a later one that centered around a camping trip she took with a few other women that I really wish I had skipped.  Sure, that chapter had some anecdotes that talked a bit about what the area was like outside of dolphin research.  But it really didn't add anything to the story about the dolphins that I was here for.

But overall, this is a very interesting and fairly quick read (I finished it in a day).  It's also really accessible for a general reading audience (not at all scientific/technical).

Labels: nonfiction, Rachel Smolker
Newer Posts Older Posts Home
Subscribe to: Posts (Atom)
*As of September 24/15, I am not taking any more requests from authors to read their books. I currently have too many books to read. I'll update this if/when that changes.*