Plastic Purge: How to Use Less Plastic, Eat Better, Keep Toxines Out of Your Body, and Help Save the Sea Turtles! 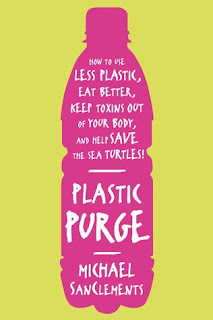 I found Michael SanCelments' Plastic Purge awhile ago at the library.  I've had it out for a few weeks, meaning to start reading it, but never really finding the time.  So finally I started it a few days ago, thinking I'd finish it before Earth Day (which I just managed to do!); I thought it was fitting since this year's Earth Day is all about plastic awareness.

Plastic Purge is an excellent starting point if you are new to trying to use less plastic in your life.  The book has four sections: history of plastics, science of plastics, a break down of what SanClements calls the "Good, the Bad, and the Ugly" plastics (aka medical devices/technology, toxins in common plastic items, and the ugly single-use, disposable plastics), and a guide for purging some bad and ugly plastics from your life.

The history section was quite interesting.  Plastics haven't been around for all that long, so SanClements gives a brief overview of how they started (and more importantly why humans were very keen on inventing it).  He also chose a couple of interesting case studies to look at in a little more detail: nylons and Tupperware.

The science section is arguably the most difficult to understand because there's a little more technical information than in other sections (plus a lot of acronyms are introduced here that appear in later sections of the book; it's a bit confusing at times keeping the different plastics straight).  But SanClements manages to break everything down so it's easy to understand; even if science isn't your strong point, you'll be able to follow along just fine. In this section, he talks about how plastics are produced, how much energy is needed to create them, the different types of plastics, recycling plastics (this was a really interesting section - I didn't realize that some plastics are not at all recyclable - the plastic symbol has the recycling arrows, so I always thought they all were!), and some information on bioplastics.  I think this section of the book was probably my favourite because I really learned a lot from it.

The third section was just a brief rundown of why some plastics are "good," "bad," or "ugly."  From the book's synopsis, I expected this section to be a bit longer than it was; even though it was short, it was concise and informative.  As I already mentioned, good plastics are used in technology and medicine; SanClements isn't saying that your smartphone or camera is a bad thing, nor is he advocating that you purge all plastics from your life.  He just wants you to be aware that not all plastics are created equally.

The final section contained guidelines to help you purge bad and ugly plastics from your life.  SanClements didn't want to make an exhaustive listing of what products are bad; instead he set out to help you think about what you're bringing into your home.  He also gives some alternatives for some common plastic items like bags at the grocery store (or for picking up your dog's droppings), children's diapers, water bottles, and much more.

A major complaint I had with the book is that it is American; some of the tips SanClements has aren't applicable here in Canada (like shopping at Whole Foods - not possible here). But even though that's the case, the book is still an excellent starting point for reducing your plastic waste.  I highly recommend it.
Posted by Shauna at 10:43 PM No comments: 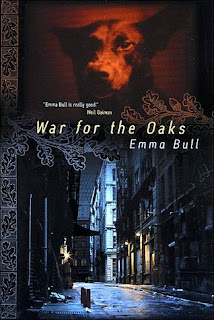 Posted by Shauna at 8:14 PM No comments:

Labels: Emma Bull, urban fantasy
Newer Posts Older Posts Home
Subscribe to: Posts (Atom)
*As of September 24/15, I am not taking any more requests from authors to read their books. I currently have too many books to read. I'll update this if/when that changes.*