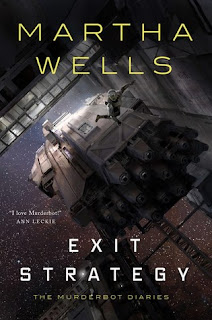 So yeah....after finishing Rogue Protocol, I just kept reading, and managed to finish Exit Strategy, the fourth book in the series, thst same night, too (I'm just slow to post about it).  Exit Strategy picks up where Rogue Protocol left off: Murderbot is heading back to Mensah to deliver the files.  There's just one problem: Mensah seems to have disappeared.  And when Murderbot starts heading towards where she was last seen, they find themself dogged by a company who is trying to apprehend them, too.  A company hired by GrayCris who is hellbent on stopping Murderbot from revealing any secrets they may have uncovered while on Milu (everything that happened during Rogue Protocol).

While I didn't like Exit Strategy quite as much as the other three books in this series, I still thought it was super good!  I really liked how much Murderbot has grown.  And it was really fun to have them reacting with some of the characters we've met before in previous books (namely the humans from All Systems Red).  There were some absolutely hilarious lines in this book too (there are great lines in all of the books, but a few of them really stood out for me in Exit Strategy).

I'm also quite interested to see where the story will go from here in book 5.  As far as I could tell, the story is pretty much over by the end of Exit Strategy.  So we'll see in a few months I guess!
Posted by Shauna at 10:20 PM No comments: 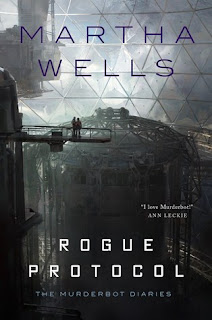 When I started reading Rogue Protocol, I was a bit bummed out because ART wasn't in it.  Murderbot and ART went their separate ways at the end of Artificial Condition.  Murderbot decided to travel further out, looking for evidence to give Mensah against GrayCris (the company who almost killed them in All Systems Red).  That brings Murderbot to a derelict terraforming platform GrayCris has abandoned; Murderbot believes the platform may not have been intended for terraforming as reported.

Unfortunately, as a derelict station, not many people go there.  Luckily though, another company, GoodNightLander Independent, is interested in purchasing the derelict platform and has sent a team to investigate it.  Murderbot decides to secretly accompany the team in order to conduct their own investigation as to the platform's true purpose.  Which is easier said than done when the team's "pet robot" (Murderbot's words) discovers their presence...

When I first started reading Rogue Protocol, I was a bit bummed out that ART wasn't there (which I knew going in, but still, bummed out).  I was even more bummed out by Miki, the robot member of the exploration team.  Miki is super naive, which was a bit grating at first.  But as the book wore on, I really warmed to them (and their relationship with Don Abene, the woman in charge of the team).

I also really liked how, despite not wanting to care, Murderbot continually finds themself drawn into protecting humans (and actually liking and respecting the humans, even if they're still super uncomfortable interacting with humans up close and personal).  And as Rogue Protocol's story unfolded, I seriously didn't want to put it down; I was totally blown away by the ending.  I've never read a series that continuously got better as it went; I hope this continues in Exit Strategy, the fourth (and at this point final book that's out).
Posted by Shauna at 11:20 PM 1 comment: 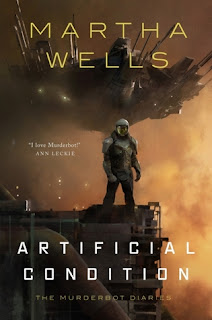 I was very excited to find book two of Martha Wells' Murderbot Diaries, Artificial Condition, was in at the library.  I started reading it last night and just finished it now.

This time, Murderbot is on the run.  After deciding to go their own way, rather than follow Mensah, Murderbot decides to travel to the planet where they killed humans.  Murderbot doesn't know exactly what happened there because their memory was wiped of the event (but their organic tissue still remembers).

To get to the planet and investigate, Murderbot gets a ride from ART (Asshole Research Transport). ART is a ridiculously smart transport who is bored having to do a cargo run, so decided to help Murderbot for fun.  ART even uses its medical facilities to alter how Murderbot looks (so they will be less noticeably not human).

To get down onto the planet, Murderbot needs to get the proper paperwork.  The easiest way is to get a job as a security consultant.  And so they end up hired by a group who had their research stolen.  Knowing this is a ridiculously bad idea, Murderbot accompanies the clients down to the planet into multiple traps; they all get away thanks to Murderbot (with ART's help in the feeds).

I didn't think it was possible to love this series any more than I did from All Systems Red, but here we are.  ART was the perfect compliment to Murderbot.  They functioned so well together as a team, I was honestly super sad to see ART and Murderbot part ways at the end of the book. :(

I really, really enjoyed reading this book, and can't wait for #3 (which should be waiting for me at the library today!)
Posted by Shauna at 4:41 PM No comments: 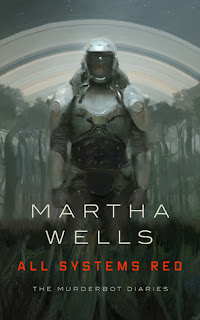 After finishing the book, I messaged my friend who got it for me.  He told me there are more Murderbot Diaries!  So I ran to the library to get the next one. :)
Posted by Shauna at 12:33 AM No comments:

Labels: Martha Wells, Murderbot Diaries, science fiction
Newer Posts Older Posts Home
Subscribe to: Posts (Atom)
*As of September 24/15, I am not taking any more requests from authors to read their books. I currently have too many books to read. I'll update this if/when that changes.*