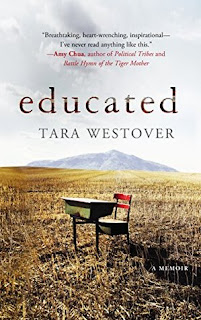 Wow.  That's all I can say after reading Tara Westover's memoir Educated.  Here's the summary from Goodreads:

Tara Westover was 17 the first time she set foot in a classroom. Born to survivalists in the mountains of Idaho, she prepared for the end of the world by stockpiling home-canned peaches and sleeping with her "head-for-the-hills bag". In the summer she stewed herbs for her mother, a midwife and healer, and in the winter she salvaged in her father's junkyard.

Her father forbade hospitals, so Tara never saw a doctor or nurse. Gashes and concussions, even burns from explosions, were all treated at home with herbalism. The family was so isolated from mainstream society that there was no one to ensure the children received an education and no one to intervene when one of Tara's older brothers became violent.

Then, lacking any formal education, Tara began to educate herself. She taught herself enough mathematics and grammar to be admitted to Brigham Young University, where she studied history, learning for the first time about important world events like the Holocaust and the civil rights movement. Her quest for knowledge transformed her, taking her over oceans and across continents, to Harvard and to Cambridge. Only then would she wonder if she'd traveled too far, if there was still a way home.

Educated is an account of the struggle for self-invention. It is a tale of fierce family loyalty and of the grief that comes with severing the closest of ties. With the acute insight that distinguishes all great writers, Westover has crafted a universal coming-of-age story that gets to the heart of what an education is and what it offers: the perspective to see one's life through new eyes and the will to change it.


Educated is quite the story.  Not only did Westover manage to educate herself without ever attending elementary or high school, she also did so while dealing with physical and emotional abuse from her brother.

The book is at times very hard to read (particularly some of the details of what her brother Shawn did to her), but the book itself is well written and overall easy to read.  I loved Westover's descriptions within the book, particularly of her mountain home in Idaho.  The phrases she used were beautiful and very evocative.

This is an incredible story and I'm very glad to have read it!
Posted by Shauna at 12:20 PM No comments:

Who We are: Reflections on My Life and Canada 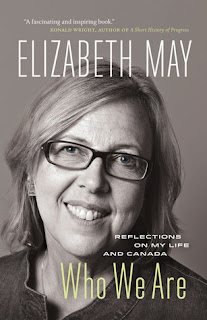 Elizabeth May's Who We Are: Reflections on My Life and Canada is another book my brother lent me quite some time ago.  May wrote it just before the 2015 election, reflecting on the changes Prime Minister Stephen Harper had enacted since becoming Prime Minister, both in terms of gutting Canada's environmental protections, and in terms of politics (how particularly under him, MPs are no longer representing their constituents, but are instead reprimanded severely for not towing the party line).  May looks at her own life, at what brought her to helm the Green Party of Canada, while also examining what Canada was, and what Canada can be once again.

For the most part I enjoyed May's writing.  But I did find I got bogged down in the middle of a lot of her chapters, often from having to flip back to see either who or what organization she was talking about.  I really wish there had been a listing of people and places rather like a Shakespearean dramatis personae (I have this problem a lot with nonfiction books).  But all in all, I'm glad to have (finally) read Who We Are; it's an eye-opening book into just what exactly is happening to Canadian politics in the modern world.
Posted by Shauna at 2:53 PM No comments:

Labels: Canada, Elizabeth May, interlude, memoir, nonfiction, politics
Newer Posts Older Posts Home
Subscribe to: Posts (Atom)
*As of September 24/15, I am not taking any more requests from authors to read their books. I currently have too many books to read. I'll update this if/when that changes.*