A work friend lent me local author Sharon Irvine's newest book, Close Encounters.  Sharon Irvine has published poetry before, but I believe this is her first book of short stories.  There are 15 stories in total, following a variety of people as they deal with relationships made out of chance circumstances.

The collection opens with "Road Kill," a story about two people travelling the Trans-Canada Highway between Sault Ste Marie and Thunder Bay.  The keep running into one another as they stop along the drive.  But their encounters escalate to tragic consequences.  I really noticed the rather poetic descriptions in this story (which isn't surprising - Irvine is a poet).

Next was "Einstein: A Sighting."  This was a cute story about inquisitive children.  The narrator was given the only bed left in the hospital, which was in the children's ward.  There she makes some new, younger friends who are curious about the gastric tube she had inserted to clear a blockage.

"Anna" was an interesting (but unfortunately predictable) story about an elderly lady who became friends with the narrator.  The elderly lady, Anna, is a fiercely independent woman who takes care of her pet friends (who are all named after literary figures).  When Anna breaks her hip, her children want her to move into a home closer to them, which means the fiercely independent woman will have to give up her entire life in Thunder Bay.

"Turkeys 0, Beavers 6" is about a farming family who go out to deal with a beaver dam.  The beavers keep rebuilding their dam, flooding the family's best farming field.  This was the first story where the narrator was noticeably different; rather than a middle-aged woman, this story was told by a younger boy.

I didn't really like "In the Waiting Room."  This was a story about the different people who come into the waiting room of the cancer centre.  The end was really unemotional and unattached, which seemed kind of odd with a story like this.

"Dead Dreams" made me particularly mad.  It involves a veterinarian (a man, making this another story that stood out due to the difference in narrator) and his alcoholic wife.  His wife has diabetes, presumably Type 1 (although she may have been a Type 2 who was insulin-dependent).  The husband finds out that she has been having an affair on him; she ends up dying in a hotel room from insulin-overdose while he is off with friends.  My issue with this story is that contrary to the author's repeated pronouncement that alcohol raises blood sugar levels, it actually lowers them.  So if you were drinking something like vodka or gin straight, you need to eat something to avoid going low.  The wife in this story is drinking gin and orange juice.  In this case, she would need some insulin to deal with the orange juice, not the gin.  So she should not have been pumping herself full of insulin (she actually uses like whole vials!!!  It's crazy!!!!)  Because of this knowledge (I myself have Type 1 diabetes), I had a really hard time with this story.

"The Loneliness of the Long Distance Swimmer" was a weird tale.  I think it was about the crazy things your brain does while bored (in this case while swimming).  But the end made it seem like all the craziness actually happened, so I'm not really sure what to make of this story.

"No Exit" was about an elderly couple who end up taking care of their grandson while his mother gets her life back on track.  It was a pretty heart-wrenching tale.  Other than the expository dump at the beginning, I really liked it.

"Second Chance" was a story about a woman who got stuck taking care of her younger, mentally handicapped brother.  She dreams about having a life free from him, but couldn't bear to leave him alone in a home.

"The Tunnel" was a story about two girls who travel to Norway to bike.  One of them is claustrophobic and gets scared of a tunnel through a mountain.  They make it through just to be confronted with another one.

"Detour" is the story about a young man who grapples with the realization he has to take over the family now that his father has passed away. This story wasn't really anything special because it seemed kind of too similar (at least in themes) to "Second Chance."

"Close Encounters" is about a teacher who teaches a "special" group of boys (most of them are in trouble with the law).  One of her students tries to kill her after she sends him to the office for not doing his school work (he will lose his car and pass to go to school).

"Sisters" was a story about two elderly sisters who are complete opposites.  But that doesn't stop them from coming together to save a puppy who was cruelly thrown into the river to die.

"The Grief Tourist" is about a mysterious lady who keeps showing up at funerals.  Another woman recognizes the lady, and so sets out to discover who she is and why she keeps seeing her at funerals.

The final story, "Lost," was probably the best story of the entire collection.  It's about an elderly woman dealing with dementia.  She uses post-its to remember everything.  She picks up her mentally-handicapped daughter to go to church, but on the way home doesn't recognize their stop.  She stays on the bus while her daughter goes for help.

So those were the fifteen stories of this collection.  I noticed that a lot of the stories revolve around death and the aftermath of death.  I guess that's because death changes things in your life unexpectedly, often in ways you cannot control. Overall, I thought these stories were okay.  Unfortunately in a lot of cases it felt like the stories ended rather prematurely, which was a real shame; had they gone further, I think they would have all been much stronger.
Posted by Shauna at 11:14 PM No comments: 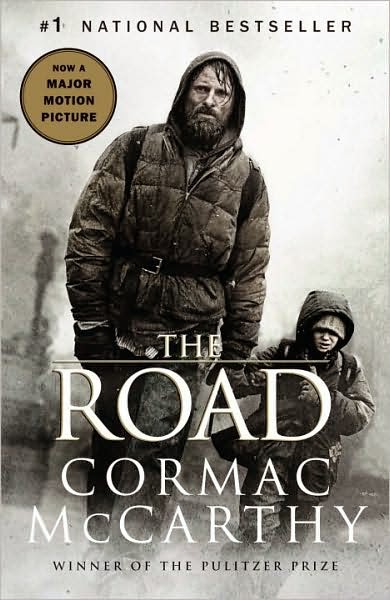 Posted by Shauna at 1:17 AM No comments:

Labels: Cormac McCarthy
Newer Posts Older Posts Home
Subscribe to: Posts (Atom)
*As of September 24/15, I am not taking any more requests from authors to read their books. I currently have too many books to read. I'll update this if/when that changes.*