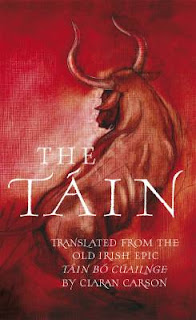 After reading A Gate at the Stairs I was in need of something completely different. So I decided to read The Tain from my other class, Translating the Middle Ages.
The Tain is an old Irish epic. In some ways it reminded me of Beowulf. There was lots of fighting, with a superman who was just better than everyone else. I really enjoyed reading it (except for a few parts where it goes on and on listing people).
One day Medb, the Queen of Connacht, starts comparing her wealth to that of her husband's. Their fortunes are perfectly matched except that her husband, Ailill, has one of the finest bulls in the land. And so she starts a war with Ulster for their bull, the only one in all the land which can match her husband's.
But the men of Ulster are all afflicted by a curse. And so it falls to Cu Chulainn, an extraordinary young man, to fend off the advancing army until his countrymen recover. Cu Chulainn uses everything from single combat to guerilla warfare to fend off the Irish army.
The Tain is really entertaining to read. I really enjoyed it, especially because it was so different from A Gate at the Stairs. I think I prefer Beowulf overall, but it was still really good.
Posted by Shauna at 12:30 AM No comments:

School Book: A Gate at the Stairs 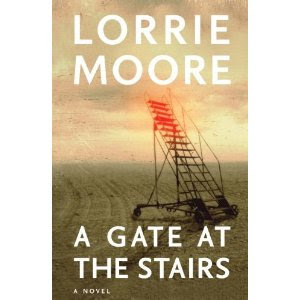 While I was reading A Widow's Walk, Lorrie Moore's A Gate at the Stairs came in from Chapters. It sounded interesting, so I decided to read it as soon as I finished A Widow's Walk.
I sort of regret that decision, but on the plus side at least I have finished the book. I had a really hard time getting into it at first because the narrator, the main character Tassie, rambles all over the place and it never seemed to get to a point. But eventually, a few chapters in, A Gate at the Stairs seemed to pick up. Accompanying her employers, Sarah and Edward, Tassie goes to another city and helps them adopt a biracial little girl, Mary-Emma (or Emmie as Sarah calls her). Tassie is employed as a babysitter for the little girl. And between Tassie, Sarah, and Emmie, the book gets to be rather entertaining between pages 100 and 200 or so, during which time Tassie meets a boy and falls in love, all the while entertaining both Emmie and the other children from Sarah's Wednesday multi-racial support group meetings.
But then the book seems to just keep on rambling with no real point (spoilers in this paragraph!). Sarah tells Tassie a bizarre and terrible story about her past, after which Emmie is recalled by the adoption agency (Sarah and Edward failed to disclose this story to the adoption agency, which has resulted in Emmie being taken away). The book felt like it should have ended here, but instead it rambled on for another 60 pages. Yes, there was another significant event that happened in these sixty pages, but the book just seemed to have no real steam left. Those last sixty pages were a torment to read.
This book is, like A Widow's Walk, for my Literature after 9/11 class. Bizarrely, for the first while I couldn't figure out how it really connected to 9/11. Other than a few references to the events and Tassie being afraid of her first plane ride (which she took with Sarah), there was no explicit connection to 9/11. But once Emmie entered the picture, so did racism. While racism isn't a new phenomenon, it's changed its face after 9/11. Tassie's boyfriend, who claims to be Brazilian, tells her that he kept getting stopped while he was living in New York because of his skin colour. Other than that, Emmie and Tassie are subject to more quiet and insidious forms of racism, like the looks Tassie gets when people assume she is the mother of a biracial child.
Other than that, the end of the book deals more directly with the wars that resulted after 9/11. Tassie's brother decides to join the army and is sent to war directly after finishing basic training. This happens pretty much within the last sixty pages, with the reader never quite sure of where he has gone (he sends a postcard home in which he says he's "shipping out tomorrow," (285), but it doesn't say where). While this ends up an important part of the end of the book, it seems like a footnote. I think that is because we are seeing the world the way Tassie sees it, but it seemed to take away from some of the later events (some of which I have to say were creepy. I won't go into detail).
Really, I thought that most of the book was rambly and I just had a really hard time with it. I never really connected with Tassie, and so I just never really cared about the book.
Posted by Shauna at 3:21 AM No comments: 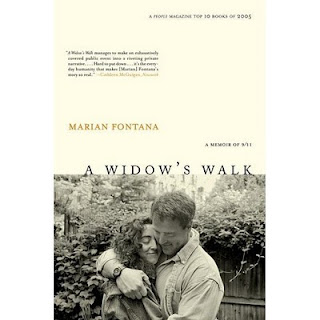 It's almost that time of year again and I wanted to read a bit ahead before classes start in a few weeks. I'm taking two classes this semester: America After 9/11 and Translating the Middle Ages. Because I am already a book ahead in the Middle Ages class (I've already read the translation of Beowulf we're using), I decided to start with a book from the 9/11 class. I chose A Widow's Walk by Marian Fontana because it was written by a writer, so I was sure it would be good.
Well, the book was really good. I just wasn't prepared for how depressing it would be (I know, something called A Widow's Walk kind of screams depressing). A Widow's Walk is Marian's memoir of her life in the year after 9/11. Her husband, Dave, was a firefighter who died trying to rescue people from the Towers. The morning of 9/11, Marian and Dave were preparing to celebrate their 8th wedding anniversary. They had just talked to one another, preparing to meet up at a coffee shop. But while Marian was dropping their son, Aidan off at school, Dave was called to the Towers and to his death.
A Widow's Walk tells the story of what happened in that first year after 9/11. It tells of the terrible grief experienced by Marian, her family, and the wives of the other firefighters from Squad 1 who lost their lives that day. It tells of 5 year old Aidan, refusing to believe that his father is never coming back. It is a story of terrible loss, but also the beauty of the human spirit as friends, family, the country and the world band together to help the families of that day.
Part way through, Marian also starts the 9/11 Widows and Victims' Families Association. While the wives of the firefighters are taken care of due to the dangerous nature of their job, other families do not have the same supports present. Marian bands together with other charities started in the wake of 9/11 to help those in need. Marian also fights for the firefighters themselves, first to keep Squad 1 open when the city wants to close it down in the first few weeks after 9/11, and later lobbying for higher wages for the firefighters.
My only complaint is that there are a million different characters and it's really hard to keep everyone straight. Other than that, A Widow's Walk is a beautiful book, with some excellent descriptions and phrases. It is also incredibly sad, documenting one woman's terrible grief. It was an excellent read which really brought the whole tragedy of 9/11 back to me nine years after the fact.
Posted by Shauna at 10:56 PM No comments: 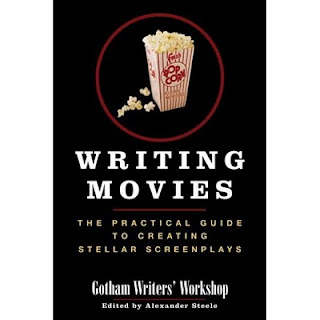 Writing Movies: the Practical Guide to Creating Stellar Screenplays is the first nonfiction book that I've ever reviewed here. But considering I've been reading it all summer since starting my screenwriting class, I thought it was fitting that I write about it here. (And now that I've started writing about nonfiction books, I'll keep doing so, although this blog will remain primarily devoted to fiction).
Writing Movies is an excellent guide for novice screenwriters (which includes myself - this class was my first introduction to screenwriting). It covers the basics of everything, from plot and characters to theme and even what the Movie Business is like. And every chapter is by a different person, so this book gives you the advice of ten screenwriters who have sold screenplays. It's a great help guiding you through the process, and it will make an excellent reference book for any help you might need with specific aspects of your script.
Posted by Shauna at 12:33 AM No comments:

Labels: Alexander Steele, Gotham Writers' Workshop, nonfiction
Newer Posts Older Posts Home
Subscribe to: Posts (Atom)
*As of September 24/15, I am not taking any more requests from authors to read their books. I currently have too many books to read. I'll update this if/when that changes.*