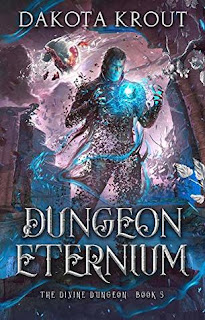 Dungeon Eternium picks up pretty much right where Dungeon Desolation left off.  They've beaten Xenocide's powerful Runes that were drawing the moon to the planet, but unfortunately that damage has already been done.  While they have more time now, the moon is still going to crash into the planet.  Also, Cal's leylines are also destroying the planet because there will no longer be any free-floating essence, devastating the world even if it survives the moon.  The only option is to have as many people as possible hide in a large enough soul space, assuming the one being with a big enough one (ie Cal) agrees.

I found Dungeon Eternium a bit dry at first.  Most of the Cal parts were just him by himself.  He was doing whatever on his own without Dani or one of the Bobs to throw ideas around with.  Dale was also just kind of doing stuff - he's no longer a noble, so he wasn't really part of the goings on politically anymore.

But I did find the stuff with the Northmen interesting, mainly from Cal's perspective.  He started exploring their city and found a dungeon underneath them.  The two dungeons made an exchange that Cal thought was well worth his while, and it was interesting to encounter another Dungeon that was so cunning.

Dani's "brother" also turned up at one point.  He was a dungeon core that grew up with Dani, so they started calling each other brother and sister.  That was admittedly a weird little side bit to the story because he didn't really add anything to the plot (and his character wasn't overly interesting either - he was a core stuck in a backpack - he couldn't spread his influence anywhere, and Cal and Dani just kept shoving him in a chest whenever Grace was around to make sure she didn't bond to him).

But then Dungeon Eternium took a few interesting turns.  First, Cal went to the very North of the world as per Dani's request.  There he found the oldest Dungeon around (Dungeon Eternium), who created the Wisps.  While the Dungeon could have destroyed Cal with merely a thought, he asks for Cal's help because the moon is going to directly impact him (which was apparently Xenocide's plan all along?)  Eternium helps Cal with some stuff, and in exchange, Cal helps bring Eternium into his Soul Space.

What was really fun about this exchange was that Eternium didn't understand Cal's language.  Cal had to give it to him, and he immediately understood and used it perfectly because he is such an immense, ancient, and wise being.  It was a neat moment.

But then the fun really began.  Barry returned and took over Mountaindale once again (but this time from the Master, who was sick of the politics anyway and so didn't care).  He took all kinds of tribute, and started trying to control who would enter Cal's soul space (although when his back was turned, the Dark Elves all snuck in).  Once almost everyone was through, he summoned his new master: Xenocide (this scene had some hilarious dialogue between the two)!  Then he made his way through the dungeon, killing everything in his path with his weird and deadly power.  Cal orders everyone to escape, but Barry catches Cal and tries to eat him and all the souls now contained within his Soul Space.  But rather than die, Cal and Dale become rejoined.  But Dale's human body cannot contain the totality of the two of them (especially since Cal is so much more than a human, plus he's in the A ranks where Dale is B).  So they have to make their way back to where Barry is before their body fails to get the perfect replica Dungeon Core that Cal made (he was hoping to use it as a distraction, but Barry knew which one was really him).

This whole part was so intense - I loved it!  It felt like a real culmination of Dale and Cal's arcs, and a really fun way to bring them together.

So while the beginning of this book was a bit dry, it's totally worth the read.  Everything (even stuff from Dungeon Desolation, my least favourite book in the series) comes together really well.  I really enjoyed both this book and the series as a whole.  :)

Posted by Shauna at 8:42 PM No comments:

Labels: Dakota Krout, Divine Dungeon, fantasy, Kindle
Newer Posts Older Posts Home
Subscribe to: Posts (Atom)
*As of September 24/15, I am not taking any more requests from authors to read their books. I currently have too many books to read. I'll update this if/when that changes.*