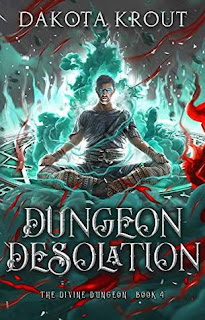 Rather than sleep, last night I stayed up super late reading Dakota Krout's Dungeon Desolation, the fourth book in the Divine Dungeon series. The Master's armies of undead are rampaging across the world, but Mountaindale, the town on Cal's floating island, remains relatively untouched.  At least until the Guild decrees that all human titles are forfeit and the town and academy are now in their hands to support the war effort.  They send an obnoxious S-level Mage to conscript Cal as well - he kills an entire floor (even Cal's essence within it), and threatens to kill the rest of the dungeon if Cal refuses to cooperate.  They want to use the dungeon to ferry troops to the back of the Master's armies.

Cal of course does not take this well, and immediately starts planning how to get out of this (and specifically how to kill the S-level mage, even though Cal himself is only a B-Level dungeon).

Dale is no longer Baron (although he remains a Duke with the Dark Elves), and so is in major danger of being conscripted into the army.  So he signs himself up at the academy as the protege of the headmaster whom he had just hired.  The clerk takes a disliking to Dale, and conspires to get him booted out of the academy by not issuing Dale receipts for his tithes to said academy (but luckily Dale gets wind of this and is able to remain in the dungeon long enough to more than make up for the shortfall).  Unfortunately, all his training, specifically to strengthen his aura, makes an imbalance within him, and Dale starts becoming uncharacteristically aggressive, both in the Dungeon and without.  It takes the intervention of his teachers to knock some sense into him (quite literally!)

While I enjoyed reading Dungeon Desolation, I didn't think it was quite on par with the other few books.  For one thing, there was a lot less Dani than in earlier books (she was training their daughter, Grace).  For another, there was a lot less of Cal doing fun and crazy things - it was kind of more of the same from book 3 (he was mostly finishing up his ley lines, and dealing with flying).  He did make a few new monsters and floors, but nothing really fun (I guess other than his battle royale of elementals that he set up and let fight and evolve on their own).

The ending was rather unexpected though: everyone was manipulated by Xenocide, the super-ranked Mage of Madness (I have no idea what his level is, but it appears to be more powerful than anyone else, even the Master) for the last several hundred years so he could get everyone into a particular place at a particular time to power a ritual for him to attract one of the planet's moons to the planet, killing everyone and "freeing them of their madness."  Now everyone has to work together to stop him, if it's even possible.

While not the best in the series, Dungeon Desolation still had some fun moments.  It'll be interesting to see how the series ends in Dungeon Eternium.