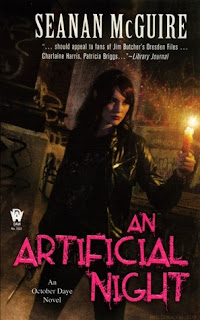 I finally got around to reading An Artificial Night, the third book in Seanan McGuire's October Daye series.  I've been looking forward to it since reading A Local Habitation (and hearing it was much better than that book was)...it just took me a few years to actually get around to reading it.  :/

This time around, Toby starts off by having a really bad day - her Fetch arrives, which means that Toby's death is immanent.  That's followed by frantic calls from one of her best friends, Stacy, because two of Stacy's five children are missing and one is now in an un-wakeable slumber.   Toby goes to investigate, finding clues but nothing definite that points to what happened to the children.  With Stacy's permission, she brings the slumbering Karen to Lily's Tea Gardens in the hope that the undine can wake her.  Along the way, Tybalt finds her and asks for her help, because several of the children from his Court of Cats have gone missing as well.  Though a great healer, Lily is unable to help Karen.  But she sends Toby to "speak to the moon" - which brings her to Luna, Sylvester's wife.  While figuring out that riddle, she finds Quentin at her place - his human girlfriend has gone missing as well.

Luna is the one who fills in the missing pieces.  The culprit is Blind Michael, one of the Firstborn Fae, and master of the Hunt.  No one would ever willingly join him and his hunt, so every hundred years he takes the unwilling: the children.  He takes faerie children to be his riders, and human children to be their steeds.  He twists them all and binds them to himself.  And he has taken all of the missing children that Toby is looking for.

To find him, Toby needs the help of the Luidaeg, the Firstborn Seawitch.  The Luidaeg can send Toby to Blind Michael's realm on one of the few roads that are open.  First Toby takes the Child's Road, which involves Toby being transformed into a child.  She manages to bargain with Blind Michael for the children - if she's able to get them out undetected, she can take them home.  But Toby takes more children than were bargained for, and so the Hunt pursues her outside of Blind Michael's realm.  Next she takes the Rose Road, care of Luna, to try to stop the Hunt from pursuing her (and to save Karen, whose soul was taken by Blind Michael while she slept).  Blind Michael agrees only if Toby stays in Karen's place.  He begins to bind Toby to him, but before the final binding can finish, Toby's friends manage to save her (along with some of the other children who were taken).  But Blind Michael has already done some major damage to Toby's mind, and she is determined to end things with him.  Which leads her back using the final road, the Blood Road, which demands a tithe be paid in blood, either Toby's or Blind Michael's.

I wish I had read An Artificial Night a bit closer to A Local Habitation.  It's been a few years, and I forgot who many of the characters were (like Quentin).  Yes, the book kind of explained things well enough so I could follow it alright, but it would have been a lot nicer had I actually remembered people!  But I did enjoy An Artificial Night.  It was a really interesting story and I didn't want to put it down (I read almost the entire book yesterday afternoon).  My biggest complaint (other than some weird things that were repetitive and should have been caught in editing, like how the book explained who Lily was both times Toby went to the Tea Gardens in almost exactly the same words) was that it wasn't scary enough.  When a story is dealing with childhood bogeymen and the main character gets turned into a child, that's a story that's ripe for some creepiness and (childhood) horror!  Unfortunately I just never felt that during the book - Toby went on treating everything kind of just like business as usual.

Other than that though, I really enjoyed An Artificial Night.  I'm looking forward to reading the next book in the series, Late Eclipses (and without letting several years pass before I pick it up!)