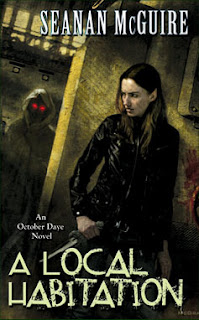 So I seem to be on an urban fantasy kick lately.  I recently ordered some stuff for my cat from Amazon.  To get the free shipping, I decided to get myself the second October Daye book, A Local Habitation.  I was going to read it over the weekend, but decided to get through Hunting Ground first.  Once that was done, I jumped into the second Toby Daye adventure.

This time around, Toby is asked by her liege, Sylvester, to investigate his niece's County.  His niece, January, stopped calling him a few weeks ago.  For faerie political reasons, he cannot go himself.  So he sends Toby and Quentin, a pureblood who is fostering at his court, to investigate.

Toby and Quentin arrive to discover there have been several murders in the County, and January insists that she has been leaving Sylvester messages but HE hasn't been returning her calls.  When another person from the County is murdered, Toby and Quentin realize they may be in over their heads.  The murders are odd for many reasons - there are distinctive markings on the victims, their blood is dead (there is no memory left when Toby and Quentin both try to use the blood magic that is inherent to their bloodline), and the night haunts haven't been taking the bodies (usually these fae creatures take the bodies and leave a sort of mannequin that looks human behind, so normally the fae can call in mortals to investigate the death without fear of the bodies giving them away.  Not so in this case). Then when Toby tries to get Quentin out of there, his escort arrives without a car, right after Toby's car is totaled. The County is also a strange place - there is a dryad living in the tech tree, and no one seems to be telling Toby and Quentin everything they know, making it really hard for them to do their job.

A Local Habitation was a bit of a mess.  The characters seemed to go out of their way to get murdered.  Toby repeatedly told the people of the County not to go off alone, then pretty much EVERYONE did.  Spoiler: most of them got killed for their troubles.

There were also two characters, brother and sister pair Alex and Terrie, who seemed obviously to be two people in one body.  Alex was only around during the day, and Terrie during night.  You never, ever saw the pair together.  But Toby never remotely figured this out - she had to be shown it near the end of the book.  They also seemed to be some sort of succubus/incubus thing, inspiring the opposite sex to love them; Toby sort of clued into that part way through the book, but still couldn't figure out what they were.  It was lame.

Overall, A Local Habitation was just okay.  I enjoyed it well enough, but wouldn't recommend it to anyone because it isn't great.  I've seen in other reviews on Goodreads that that seems to be the consensus - A Local Habitation is everyone's least favourite book in the series.  But book three is supposed to be phenomenal, so I'll be looking for that in the future.
Posted by Shauna at 2:22 AM

I left out a whole lot of synopsis because after finishing the book, I honestly didn't care that much about what had happened. Tybalt showed up (which wasn't surprising, I kind of figured he would once he lent Toby his jacket). Before that, Connor showed up to take Quentin back home (Connor is the guy she loves, who loves her back, but he's married to Sylvester's daughter for political reasons). They tried calling Sylvester who told them to stay put for no reason (they tried calling from the phone lines that clearly weren't working - why would it be surprising that the person they thought was Sylvester wasn't ACTUALLY Sylvester). The weirdest thing was that the people were trying to make like a digital faerie realm because of the dryad's existence. It seemed especially weird because faerie and digital don't normally mix. Turns out that's mostly true - the dryad exists, but everyone else they tried to upload died.

Oh, but Toby used up her final question with the Luidaeg - she wanted to know how to summon the night haunts to find out what they were. So now she knows, and in payment (for them not to take her), she has agreed to keep their secret. So that was an interesting development. Plus the Luidaeg didn't kill Toby at the end of the book like she kept promising she would (not REALLY surprising because there's like 10+ more books).