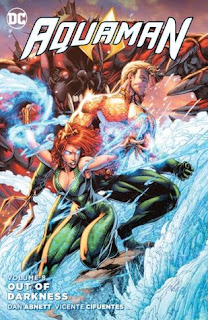 So here it is: the final Aquaman graphic novel before Aquaman: Rebirth, Aquaman: Out of Darkness. I saw it at the library and had to get it since I've read the other seven in the series.

Arthur wants to create an embassy on the American coast. That way Atlantis and the surface world will be able to learn about each other diplomatically. He asks Mera to head the mission. She reluctantly agrees.

Meanwhile a mysterious creature has been killing people on land. The attacks look like shark bites, which is odd because many of the killings have been happening on land, away from the sea. The FBI calls on Arthur to solve the case, which brings him into contact with Dead Water, a creature that can teleport through the tiniest drop of water. When Arthur discovers Dead Water used to be a man, he must go to extremes to stop him (including keeping the man extremely dehydrated so he won't revert back to Dead Water) and find out what happened.

I've been reading Rebirth since it started, but I missed all of these stories. It's nice to finally be caught up (and to know where Dead Water came from). I'm still waiting on that war of the seven seas promised at the end of Volume 4 though).
Posted by Shauna at 11:42 AM No comments:

The Dark Tower: the Gunslinger 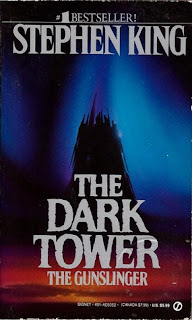 I've put off reading Stephen King's The Gunslinger for years. Everyone told me how good it was. But I didn't want to get bogged down in the huge Dark Tower series, so I never bothered to start it. But now that the movie is coming out this summer, I figured I should actually get my act together and read it.

The Gunslinger is the story of the last gunslinger chasing the man in black across the desert. We don't even learn the gunslinger's name until about halfway through the book (which seemed a bit odd to me). The gunslinger has been chasing the man in black for a long time, but is finally catching up to him. Along the way, the gunslinger meets some people and tells them stories about his past.
The atmosphere and worldbuilding of the book is great, particularly in the early chapters. And I was a fan of King's writing (minus the absurd number of references to the gunslinger's genitals - that seemed really weird as it kept going on through the whole book, especially since it came up pretty randomly - like not as he was having sex or something, but when he was like shooting monsters). But I had a really hard time connecting with the story, particularly in the latter half of the book (a boy from our world finds himself in the gunslinger's world; the two of them chase the man in black together). It was around page 200-250 where I knew I wasn't really interested in reading more of the series (and honestly wasn't too interested in finishing it but I persevered). Of course the book ends in a spot perfect for the sequel. But I still don't feel very interested in continuing (and actually feel less interested in seeing the movie now that I read the book).
Posted by Shauna at 6:58 PM No comments: 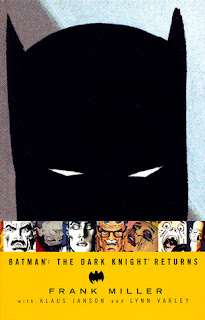 My brother got Batman: the Dark Knight Returns for me during Christmas.  We had talked about how it was super influential in regards to Batman and comics in general (this review by Stephen on Goodreads sums up the historical significance quite nicely), but I purposely didn't really read what it was about so I could just let the story happen with as few expectations as possible.

The Dark Knight Returns starts with Batman having been retired for ten years.  But unlike in The Dark Knight Rises, Batman hasn't been moping about in his home all alone; he's been living life as billionaire Bruce Wayne.  But with crime spiking in Gotham thanks to the Mutant Gang, something inside Wayne snaps and he can't keep the Batman hidden inside anymore; Batman returns with a vengeance.  But Wayne is a man pushing sixty.  Being the Batman is no longer an easy task for his older body.

But Batman is not alone in his war against these new criminals.  He is joined by Carrie Kelley, a girl who is inspired to become the new Robin after Batman saves her.  Unfortunately though, Batman's return doesn't just inspire the good like Kelley; the Joker also returns with a vengeance!

I wasn't remotely prepared for how political this story was.  In many ways it reminded me of Watchmen in how much it comments on the very real threat of nuclear warfare that people living during the Cold War were dealing with.  But the book also looked at how people in and around Gotham reacted to the Dark Knight's return, with ordinary citizens, doctors, and politicians commenting on whether or not Batman is a menace or a boon to Gotham City.  This book also dealt with Commissioner Gordon retiring and being replaced by a woman who very much believed Batman was a menace.

While the story is interesting from so many angles, I have to say, I was not a fan of the art.  The heads were weirdly blocky, and it was hard to distinguish who a good chunk of the characters were supposed to be (Lana Lang in particular - if they didn't say that's who she was, I would have had no idea - but I'm also more familiar with more modern iterations of her character).

I can usually get through a typical graphic novel in an hour or two of reading.  The Dark Knight Returns is NOT your typical graphic novel.  There's so much dialogue in this that it gets a bit overwhelming at times.  It took me several days devoting a bit of time here and there to get through the whole thing. Luckily it is broken up into four fifty page chapters, so I generally was just trying to make a mad dash to the end of the chapter before I would put it down and go about the rest of my day.

Labels: Batman, Frank Miller, graphic novel, Klaus Janson, Lynn Varley
Newer Posts Older Posts Home
Subscribe to: Posts (Atom)
*As of September 24/15, I am not taking any more requests from authors to read their books. I currently have too many books to read. I'll update this if/when that changes.*