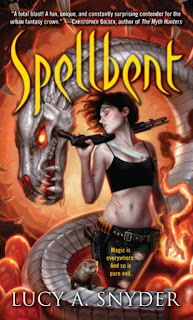 I found Lucy A. Snyder's Spellbent in Chapters back before my Toronto trip. I took it with me and started it after I finished The Hob's Bargain. Unfortunately, I couldn't really get into it. I got 40 pages in, then stopped. A few weeks went by while I put off going back to it; I continued moving onto something else. Finally, a few days back, I decided to finish off Spellbent in the hopes it got better.
Spellbent is the story of the mage Jessie Shimmer and her ferret familiar Palimpsest on their quest to rescue her lover Cooper Marron from Hell. I have to say, I absolutely love the premise of the book; reading the back randomly in Chapters made me want to buy it and read it immediately.
Unfortunately, I've never really liked Jessie. I don't know what it is about her, but I just couldn't really connect with her. I absolutely loved her familiar, Pal. The fact that a giant spider-like creature is stuck in the body of a ferret was really awesome (and the idea that something would have to serve as a familiar for hundreds of years as punishment for some unknown crime is horrifying). I also liked some of the other characters, like the Warlock. But I never really liked the main character.
I also found the story a bit boring. While terrible things seemed to happen pretty quickly, it just never really held my attention. I'm not sure why this happened, but that was the way it was; I'm thinking it probably came down to Lucy Snyder's writing style.
So I was kind of disappointed with Spellbent. While I liked the overarching story, I wasn't really impressed with the specifics. I think I'm going to give her future books in this series a pass.
Posted by Shauna at 8:21 PM No comments:

As I mentioned in my review of The Hob's Bargain, I just got back from a trip to Toronto. Of course, while there I went book shopping. While most of the books I bought were graphic novels, I did buy a few novels and whatnot (while it is not a List Book, I managed to find a copy of Story by Robert McKee which I am very happy about!) Most of the graphic novels are Batman stories (many of which were recommended to me by someone I met in the Labyrinth, the store where I bought most of the graphic novels I bought), but I got a few random other ones as well (one of which was Marvel Fairy Tales, a graphic novel I have been looking for for quite some time!) The only other book which will not be added to the List is Batman: Vampire. I decided I wanted a copy of it for myself, so I picked it up at the Labyrinth.

Unfortunately, my Toronto trip brings the total number of books on The List up to an even 140. On the plus side, that's only one more since my last update (I managed to read about 8 books since then), but now I have a LOT of reading to do!
Posted by Shauna at 2:20 AM No comments: 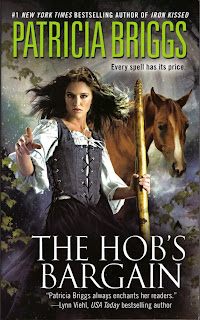 I actually finished reading Patricia Briggs' The Hob's Bargain on June 5th while I was away in Toronto. I waited until I got home today before writing this review because I decided to take a week off from using the internet.
The Hob's Bargain is the story of Aren. Her family is murdered by bandits and then magic is set free within the land. While she is mistrusted and feared by many of the villagers because of her magical abilities, she agrees to do anything within her growing power to save her village and valley, including making a bargain with the newly awakened hob.
The Hob's Bargain was pretty good overall but seemed a bit predictable. The basic plot was pretty similar to Steal the Dragon (there was a male friend introduced near the beginning of the book who looked like a potential love interest, but in the end the strong female character falls for the magical being instead, which is made obvious about halfway through the book). But even though it was really predictable, I enjoyed reading it. I really liked Aren, the strong female character. She managed to move beyond the prejudices inherent within her village, showing herself to be just as capable as the men. I really liked the hob, despite never being completely clear on what he was. I just wished that there had been more from his point of view. And the book's ending even managed to surprise me in some ways, which was great.
As I said, I did enjoy reading The Hob's Bargain in spite of its predictability. It was a pretty good story which kept me reading, wanting to know more.
Posted by Shauna at 1:45 AM No comments:

Essential Godzilla: King of the Monsters 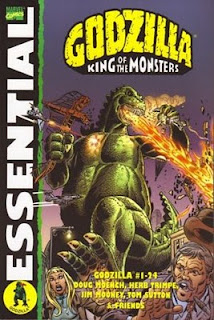 I got Godzilla: King of the Monsters about a year ago in Toronto. It was free comic book day, and a graphic novel store that I frequent was giving copies of it out. I wasn't really sure if I was going to read it, but I took it anyway. Of course, that fear has been assuaged over the last few days as I have indeed read it. And what a wild story it was! Godzilla is in North America, and he does pretty much everything: fight superheroes, solve mysteries, shrink, go back in time, and of course he fights other monsters, too!
While this is the story of everyone's favourite gigantic lizard, it is also the story of Dum Dum Dugan, the S.H.I.E.L.D. agent sent to deal with the problem, and of Rob Takiguchi, the grandson of Dr. Takiguchi (who was sent with his grandson and assistant to deal with Godzilla). Rob is the only one who believes in Godzilla's innate goodness and who tries to stop everyone from attacking the giant lizard. And no matter how many times Rob is proven right, no one will listen to him, especially not Dum Dum.
I have to admit, I didn't really like Dum Dum Dugan. He was one of those characters that no matter how many times he was proven wrong, he refused to alter his standpoint. In this case, no matter how many times Godzilla saved his life, he continued to attack the giant lizard. It got really old really fast.
Godzilla: King of the Monsters was by no mean the best thing I've ever read. It's pretty dated in some ways, and it is pretty long (it's made up of 24 issues). And the whole "only the kid knows" stuff got pretty old. But overall, it was a lot of fun. I mean, Godzilla beating up everything is always entertaining.
Posted by Shauna at 4:12 PM No comments:

Labels: Doug Moench, Godzilla, graphic novel
Newer Posts Older Posts Home
Subscribe to: Posts (Atom)
*As of September 24/15, I am not taking any more requests from authors to read their books. I currently have too many books to read. I'll update this if/when that changes.*