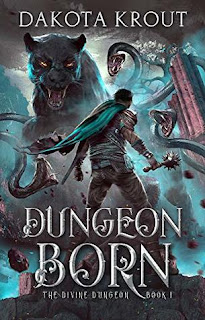 A friend of mine really wanted me to try Dakota Krout's Dungeon Born, the first book in the Divine Dungeon series.  It tells the tale of a soul that gets sucked into a soul gem and becomes a brand new dungeon.  The dungeon, names Cal by Dani, his wisp servant/friend, needs to grow and evolve, attracting adventurers to attempt the dungeon (and hopefully die along the way, feeding Cal energy and new toys to play with like weapons and runes).

Dungeon Born is also the tale of Dale, one of the sheepherders who discovered the dungeon (and the only one to live to tell the tale).  Dale ended up selling all his belongings to buy the entire mountain the new dungeon is on, knowing that all the people who will be interested in the dungeon will make him rich once word gets out.  This leads him into the Adventurers' Guild and training to become an adventurer.  It also leads him into politics as all the people who want to use the dungeon don't realize that he owns the entire mountain.

I'm not going to lie, the beginning of this gets a bit rough.  Krout's world is very much like an RPG system, complete with leveling of the characters, and for awhile Dani's explanations to Cal about everything really made me feel like I was reading an RPG rule set rather than a fictional story.  But once you get past that, the story gets super fun!  I'm quite excited to see where things go in Dungeon Madness, the second book in the series!