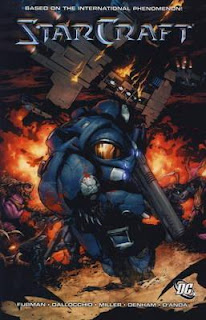 Lol!!!  So apparently I read Simon Furman's Starcraft graphic novel years ago, but didn't remember it at all!  The only reason I discovered it was a reread is because I marked it off on Goodreads!

This story follows a band of mercenaries who were sent to do the Terran Dominion's dirty work.  They're betrayed and scatter.  But two years later, they're given the chance to clear their names if they do one more job: kill the mercenary leader Jim Raynor.

The beginning of the comic is really hard to follow, especially when you're trying to figure out who all the characters are (I got hung up for a long time on trying to figure out if someone was left for dead but survived and came back, or if it was another character coming after them). I also had no real connection to any of the characters and didn't really care what was happening.  But by about halfway through, I started to put the pieces together a bit better and found myself caring about what happened to them.

Of course, the story was greatly boosted by Jim Raynor appearing.  He's such a great character and really added the touch that was missing, particularly for Cole Hickson's backstory (that they knew each other from before, and that Hickson helped Raynor get through an ordeal at a POW camp they were both in).

Unfortunately the series was cancelled before the second arc was finished, so I don't get to read more about these characters. :(