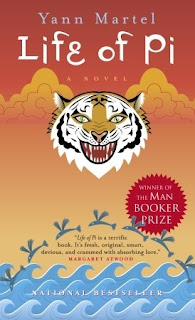 I've had quite the history with Yann Martel's Life of Pi.  Every time I was thinking of reading it over the last several years, I'd end up talking to someone who ended up spoiling the ending for me.  So I'd wait for some time to pass, and just when I was ready to read it, that would happen again!

But finally, back a few months ago my brother mentioned rereading it, and I decided that I was going to finally read it once and for all.  I started it in early February, got through the first part (about 100 pages), and just sort of stopped reading.  It was very similar to another book I started this year, The Starless Sea by Erin Morgenstern; in that one I also read about 100 pages, then stopped for a few weeks because I just wasn't interested in it at all.  I found Life of Pi was holding my interest a bit better than The Starless Sea did, but it still wasn't great.  So after a few weeks of it sitting and me having no interest in it anymore, I told first my mom, then my brother that I was giving up on it.  I hung up the phone with my brother, then like immediately grabbed it and started reading it again.  This time I made it to the end (although at times it admittedly was a struggle).

Life of Pi tells the story of Pi Patel.  Born in India, his family owned a zoo, where Pi spent many happy days whiling away the time.  But as he got older, his family decided they wanted to move to Canada.  They sold their animals and were on a cargo ship with them travelling across the Pacific Ocean when the ship sinks.  Pi is the lone human survivor, who finds himself on a lifeboat with a hyena, a zebra, an orangutan, and a Bengal tiger named Richard Parker.  Over the course of their first few weeks, the other animals are killed until it is just Pi and Richard Parker left.  Pi determines that he must tame the tiger in order to save them both.

Life of Pi reminded me of The Martian (although Life of Pi was written first, so I guess The Martian drew inspiration from Life of Pi?) in that it is a castaway story of extraordinary circumstances (although I felt like less went wrong for Pi than it did for Mark Watney, while also Pi got incredibly lucky at eventually finding land where Mark Watney just had to survive for his crew to return).  But while I don't remember The Martian very well, I think I enjoyed it a lot more than I did Life of Pi.  Not only did I have a hard time getting through this book as already mentioned, but I found some of the descriptions of what happened far too graphic for my liking.  The book itself was also very slow going; there were multiple points through part 2 (the actual being stranded part) where I kept flipping ahead wondering how much more of this is there? (And then wondering how there could possibly still be so much of the lifeboat adventure to go???)  My brother also mentioned to me that I missed the cultural moment when everyone else was reading it, so I don't even really have that happening in its favour either.  But I am glad to finally be finished it (and that I actually DID finish it); now I can move onto something else - hopefully something more light-hearted!