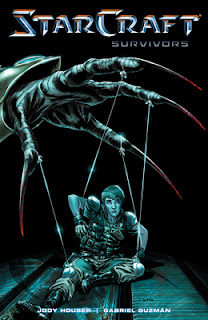 The reason I (re)read Starcraft earlier today was I mistakenly thought it was volume 1 to a newer graphic novel that I saw at the library, Starcraft Survivors.  But no, these two are totally different storylines!

Unfortunately the library doesn't have volumes 1 and 2 in this series, so I had to just jump into volume 3 and hope I could figure it out.

Starcraft: Survivors starts directly after a Dark Templar woman has killed all but one member of a Terran ship.  She spares Caleb's life as long as he is useful in her search for great power.  One of his crewmates' thoughts provides a clue: an Umojan Lab; this leads the two of them to a planet under the Umojan Protectorate.  Caleb is sent to fit in with the locals and find this power.  But he's hindered by the impatience of the unnamed Dark Templar. She kills someone as a warning to Caleb to hurry up, and threatens to kill more within five days if he cannot find the lab.

While it took a bit to get into the story (again, volume 3 in the series), Starcraft Survivors was really good.  The ticking clock from the murderous Dark Templar set the stakes high as Caleb is trying to blend in and keep his head down, all while the other workers in his factory try to befriend him (and he gets drawn into their friendship despite attempts not to).  Gabriel Guzman's art is the perfect compliment to Houser's text.  And just look at that cover image by Guzman - it's creepy, and perfectly encompasses the story!

I really liked the characters (and would love to know more, especially about the mysterious Dark Templar woman - what was she trying to do?  Why did she need great power, and who was she trying to get revenge against? Unfortunately this story didn't shed light on it (I was hoping for some sort of afterword, but no such luck!)

I did spend a bit of time Googling Dark Templar though, because part way through this story I noticed the unnamed Dark Templar's face - and it looked like she had a hydralisk-style jaw!  That did not seem right to me, and I originally figured she might be some weird kind of Protoss-Zerg hybrid (which might also explain her wanting revenge...), but a Google search turned up other images of some Dark Templar with that style jaw bone.  So that's neat, I had no idea that was a thing!

I also want to note, I love that they're doing these kinds of stories with Starcraft now!  None of these characters are part of the games, or interact with major characters from the games, which I liked because this story helps to expand the world of Starcraft, showing that it really is a universe with all kinds of people in it.  I hope they continue making these kinds of stories - while I do love many of the main characters, it's nice to see new ones added, too. :)