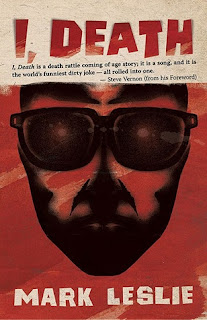 I also wasn't at all prepared for the tone shift in parts two and three.  Where part one was an angsty teenager talking about his life, parts two and three suddenly dealt with gangs and a whole lot of rather graphic violence.  Needless to say, I, Death really wasn't my kind of book.
Posted by Shauna at 2:12 AM