Prisoner of Ice and Snow 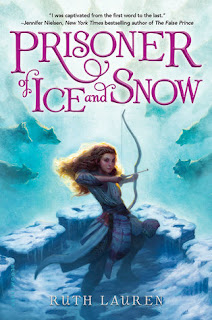 Valor's twin sister Sasha was given a life sentence in jail after stealing from the royal family.  So Valor decides to spring her sister from the inside!  She gets herself thrown into the same jail by shooting an arrow at the prince.  So now she just needs to find her sister and get the two of them out.  Unfortunately they are in Tyur'ma, the prison for young offenders; no one has ever successfully escaped from Tyur'ma.  But that doesn't stop Valor!  She has a plan to get them both out!

Prisoner of Ice and Snow is a lot of fun.  Seeing how Valor needs to outsmart the warden (and the prince, who has taken an interest in her), all while trying to figure out who among the prisoners she can trust (and while dealing with unexpected setbacks) was great.  There's also some really great worldbuilding - the Kingdom of Demidova is ruled by the Queen and passes through the female line.  Valor was supposed to be following in her mother's footsteps as Queen's Huntress, and Sasha was training to be the future Queen's Advisor before she was sent to jail.  I didn't get a great sense of what most of the men in the kingdom do, but Valor's father was the current Queen's Advisor before their family was disgraced by the theft, so men do not seem to be treated as second-class citizens in Demidova, which was nice to see (I remember men being second-class citizens in Melanie Rawn's Exile's series, which I read long before starting this blog).

All in all, this was a fun, super fast read that i quite enjoyed.
Posted by Shauna at 12:50 PM