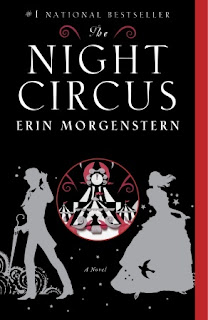 I've wanted to read The Night Circus for a while now.  My brother gave me a copy (I think last year) and I've been meaning to read it ever since then.  But every time I grabbed it, The Night Circus would sit on my nightstand while I inevitably started some other book instead.  I don't know why this kept happening - I've heard super good things about the book.  Interestingly, when I was talking to a friend at work about planning on starting it earlier this week, she said the exact same thing!  Strange.

But once I did actually start reading it, I finished it in just a couple of days. :)

I don't know quite how to describe the book, so I'm going to let the summary on Goodreads do the talking for me:


The circus arrives without warning. No announcements precede it. It is simply there, when yesterday it was not. Within the black-and-white striped canvas tents is an utterly unique experience full of breathtaking amazements. It is called Le Cirque des Rêves, and it is only open at night.

But behind the scenes, a fierce competition is underway - a duel between two young magicians, Celia and Marco, who have been trained since childhood expressly for this purpose by their mercurial instructors. Unbeknownst to them, this is a game in which only one can be left standing, and the circus is but the stage for a remarkable battle of imagination and will. Despite themselves, however, Celia and Marco tumble headfirst into love - a deep, magical love that makes the lights flicker and the room grow warm whenever they so much as brush hands.

True love or not, the game must play out, and the fates of everyone involved, from the cast of extraordinary circus per­formers to the patrons, hang in the balance, suspended as precariously as the daring acrobats overhead.

Written in rich, seductive prose, this spell-casting novel is a feast for the senses and the heart.

So we have the physical circus, which is the venue chosen for Celia and Marco's duel.  Celia and Marco were trained from young ages to duel, but were never actually told by their instructors (Celia's father and the mysterious Mr. A.H.) what the parameters of the duel were.  Celia doesn't actually know who her opponent is for quite some time, while Marco knows it is her from the moment he first sees her; Celia is the circus's illusionist, and she assumes her opponent is someone else physically in the circus, but Marco is the proprietor's assistant and so manages from afar.

This book is magic to read. The idea of using a physical place like a circus as the venue for a duel is fantastic.  The circus itself is a place where people expect to "see" magic, so anything Celia and Marco do to influence it just fits in with the general ambience.  I loved how the new tents they would create were basically love letters to each other. :)

It was also interesting just how much the circus became wrapped up with them.  By the end of the book Le Cirque des Rêves could not function without them.

One thing I had a hard time with were the dates.  The story twists and turns through time (specifically jumping ahead a few years to show what is happening to Bailey, a young boy who is enchanted with the circus and one of the twins who was born there), then heads back to show what is happening with Celia and Marco. Even though there were months and years (as well as the city), I had a hard time keeping it all straight in my head.  And once Bailey's story intersected with Celia and Marco's, this got even harder to keep straight!

Overall though, I really enjoyed The Night Circus.  It is a magical, unique book that I'm glad I finally read.
Posted by Shauna at 2:17 PM