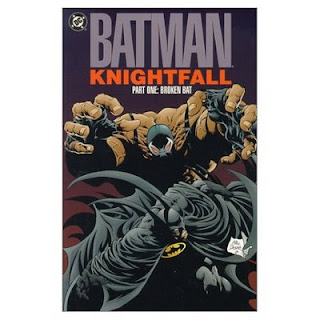 I have read parts 1 and 2 of the Knightfall series. And I have to say, I absolutely loved Part1: Broken Bat! Bane released all of the villians from Arkham Assylum, using them to wear out the Dark Knight. Batman, who was already in rough shape from the previous few weeks, is slowly but surely worn down as he goes after the escaped villians. He has no time to rest, even though his body desperately needs it. There were many fights when Batman should have been able to take out the thugs no problem, but he was only able to by using the last of his strength. Depleated, there were many images of him hiding in the shadows, exhausted. Yet he always managed to find the strength to continue as there was no one else. 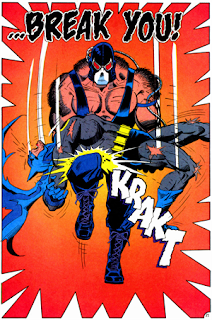 It was the strangest story to read: with Batman barely managing to remain on his feet. And finally, when Bane struck, Batman was at his weakest, and he lost! Bane attacked Batman at home, when the Dark Knight was mentally and physically exhausted. Batman tried to fight back, but there was no strength left in him. And so Broken Bat left me with this image: Bane literally breaking Batman! It is a sad and terrifying image: no one should be able to break Batman!

So of course I had to start reading the second graphic novel in the series: Who Rules the Night. It starts out where Broken Bat left off, with Bane gloating over the fallen Knight. 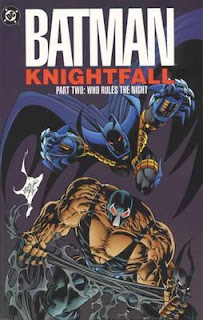 And so there is a desperate attempt on the parts of Tim (Robin) and Alfred to save Batman from being paralyzed for life. Fighting the clock, they manage to get the medicine they need, the only one that can help heal a broken back.
But now Gotham is in ruins. News that Batman has fallen bursts open the flood gates. Crime skyrockets. With no one to stop them, criminals everywhere try to carve a piece out of the city. And Bane lords over everyone, proclaiming the city his.
Into this dreary night comes Batman's chosen successor, Jean Paul. Jean Paul takes up the mantle of Batman with the help of Robin, but quickly proves to be a much darker Knight than that of the real Batman. He slowly decides to disobey Bruce's command not to engage Bane directly, deciding that taking down Bane will be the best way to stem the tide of chaos that has taken over Gotham. He modifies his costume, and becomes increasingly violent. Robin desperately tries to reign him in, but Jean Paul will not listen.
Jean Paul fights Bane twice. He injures Bane a lot, but almost dies in the process. For this reason he modifies his costume again, needing more than just the claws he had made the first time. It is during his second encounter that Jean Paul manages to bring Bane down. At the last moment, he decides not to kill Bane, but instead leaves him broken, much like how Bane left Batman.
It was a great story, and I can't wait to get a hold of part 3. But I definitely didn't like part 2 as much as part 1. There wasn't enough Bruce Wayne in part 2 for starters, which, although understandable, still made me sad. And I think I liked reading the downfall of Batman rather more than the aftermath. Jean Paul seemed rather unstable, and also kind of scary. I know Batman is not made of teddy bears and gum drops or anything, but he does have his code, and it never seemed like Jean Paul held up to it. (I know, that was the point, but I didn't like it).
Finally, I now have a reason to hate "Batman and Robin" even more. They totally butchered the character of Bane!!!
Posted by Shauna at 6:01 PM