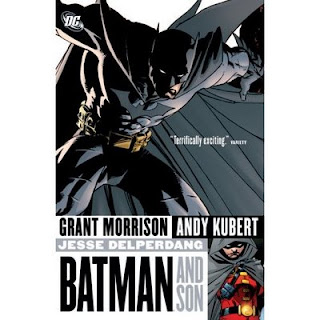 I picked this up about a month ago. I have to admit, I was intrigued about the idea of Batman having a son. Especially one trained by the League of Assassins.

So after The Bloody Chamber, I decided to take a shot with this book. And I have to say, the first half of it was great! There was a lot of action all over the place, and a lot of confusion over the fact that Batman has a son!

But at about the time of the Joker interlude, things started to go downhill. The Joker story, The Clown at Midnight was extremely creepy. It wasn't altogether bad, but it didn't seem fitting in the middle of this graphic novel. It slowed the action down a lot, being an actual short story, not a comic book. And did I say it was creepy? I can't stress that enough.

When I finished reading the interlude, I thought I would get right back into the action of the main story. Well, things went back to Damien, Batman's son, for a little bit. But then there was a bit about this Bane-like figure. And then came the weirdest thing of all: the last chapter of the graphic novel was set in the future. Batman died somehow, and Damien took over as Batman. It was confusing and an altogether disappointing end to the whole story. I wanted to know what Damien's mother was going to do after the explosion!

Long story short, this graphic novel was okay. The beginning is a lot of fun, but the ending leaves something to be desired.