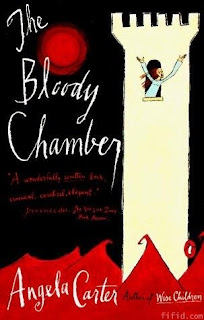 While I was studying for my Children's Lit exam, I came upon a reference I had written in the margins of my notes of The Tiger's Bride by Angela Carter. The Tiger's Bride was supposed to be a modern rescripting of a fairy tale, much like Bluebeard's Egg by Margaret Atwood (which we were studying). And so, after my exam, I decided to head to Chapters to get a copy of the book which The Tiger's Bride was in.
The Bloody Chamber is a collection of short stories by Angela Carter. There are eight tales in the book, all inspired by folk and fairy tales.
The first tale, The Bloody Chamber is based off of Bluebeard. The next two, The Courtship of Mr. Lyon and The Tiger's Bride are both based off of Beauty and the Beast. Puss in Boots is obvious. I'm not entirely sure what The Erl-King is based off of. The Snow Child is based off of Snow White, while The Lady of the House of Love is based off of Sleeping Beauty. The next two, The Werewolf and The Company of Wolves are based off of Little Red Rising Hood, and the final one, Wolf-Alice is based off of Through the Looking Glass, and What Alice Found There.
All of these tales were quite good, even though they are very heavy with description (which I'm not overly fond of). Most of them were of a sexual nature, which makes sense as they are based off of fairy tales (and most likely the originals, not the kid-friendly Disney versions). All in all, this was a good read, which really makes you think about the stories in a new light.
Posted by Shauna at 2:31 PM

Very interesting his text. An embrace