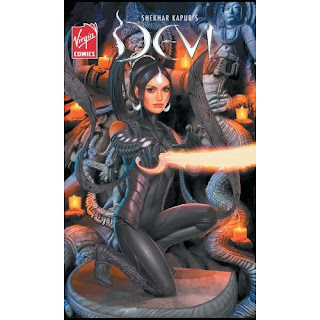 I saw this graphic novel while I was at work yesterday. It sounded like it was a neat idea, so I decided to take a look at it.
Devi is a mortal woman who is chosen to host a goddess. The mortal woman is killed so that the goddess has free reign to go and stop the evil demons. Devi draws on the rich traditions and mythology from India. It is definitely a one of a kind read!
I thought it was really neat that Devi is also one of the first graphic novels produced in India. According to the introduction, Virgin Comics was developed in an attempt to revolutionize the Indian entertainment industry, similar to the manga of Japan. I'm very happy that they succeeded; if they hadn't then I would not have been able to read Devi in English. This book is volume 1, so I am hoping to get my hands on the next ones!
I also wanted to point out that it was rather neat seeing the Indian gods and goddesses in a graphic novel. Thanks to the religious studies course I took in my first year of university, I recognized some of the names of deities and other things from their culture (although that was a long time ago, and I could not recall everything I learned from the course). This really is a unique story that is worth checking out!
Posted by Shauna at 9:30 PM