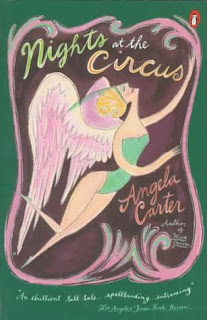 Angela Carter's Nights at the Circus is the last book I have to read for Identity in British Fiction! And for the last book of the course (well, there are two more but I've already read them) it was sufficiently strange.
Sophie Fevvers is an aerialiste who is half woman and half swan. She is the star of Colonel Kearney's circus. Jack Walser is a reporter who is on a quest to find out whether or not Fevvers is a fake or not. He joins the circus in an effort to find out.
The book was a little dry at first. Fevvers and her foster mother Liz tell the bizarre tale of Fevvers' childhood. It's a bit hard to get into at first, but it's really entertaining. Part 2 is made up of Walser's adventures as a clown in the circus. And Part 3 is where everything gets really weird: they are derailed, kidnapped, and Walser loses his memory. There is also a weird progression throughout the book with the narrative point of view where part 1 is third person, and parts 2 and 3 have more and more first person perspectives worked in.
I'm still not sure what exactly to make of Nights at the Circus. It was hilarious but strange, entertaining yet bewildering all at the same time.
Posted by Shauna at 11:03 PM