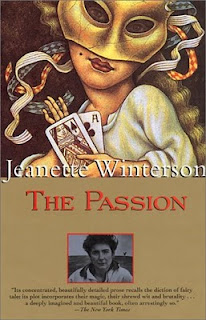 The Passion by Jeanette Winterson is a crazy book set during the rise and fall of Napoleon Bonaparte. Henri is a peasant boy who believes in Napoleon and follows him all the way to Russia. He enlisted to be a soldier in the Grand Army, but ends up in the kitchen tent preparing and serving Napoleon chicken. Villanelle is the Venetian daughter of a boatman who sold her heart and was later sold to the French by her estranged husband. Both of their paths meet and their lives become forever entertwined.
When I first started reading The Passion, I wasn't sure what to make of it. But I was quickly caught up in first Henri's and later Villanelle's story. While it was strange at times, The Passion was a quick and enjoyable read. If you're looking for something a bit different then this one's for you!
Posted by Shauna at 7:11 PM