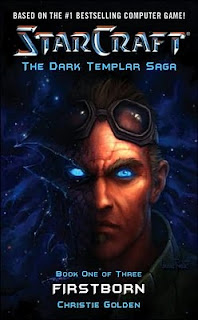 Firstborn came out a few years ago. As the first book of a trilogy, I wanted to wait until the final book came out before getting it. Unfortunately, the third book ended up delayed for a few years and by the time it came out the first two weren't readily available. I then decided to wait until all of the trilogy was published in an anthology like The Starcraft Archive, which collected the first three published novels as well as one story which was only released as an e-book. All of that changed when I went to Duluth and found them in Barnes and Nobel. I ended up buying both Firstborn and Shadow Hunters (Book 2) there, and I came home and picked up a copy of Twilight (Book 3) here (the only copy of Twilight that they had was in really rough shape).
Firstborn begins the story of the archeologist Jake Ramsey. He is given the chance of a lifetime when he is hired to excavate an abandoned temple. Inside he discovers the body of a Protoss and becomes bound to her spirit, a Preserver who brings with her the memories from the entire Protoss race. Jake is left trying to sort through these memories while hanging onto his own Terran identity. On top of all of this, the benefactor who hired him wants the extraordinary contents of Jake's modified brain and is hunting him down. Jake's only hope lies with both Zamara, the Protoss he has merged with, and R.M. Dahl, the very woman who betrayed him after he merged with Zamara and was then betrayed herself.
When I first saw that the entire trilogy was by Christie Golden, I was incredibly excited. Several years ago I read her Ravenloft book Vampire of the Mists and loved it. And even though I waited a long time to get my hands on the Dark Templar Saga, the wait was worth it! I love Christie Golden's characters, especially Jake Ramsey and Zamara. The story is great so far, with action and betrayal everywhere you turn. And Christie Golden even managed to make the events from Shadow of the Xel'Naga, a book I hated because it felt like it was written by people who had no idea of how the Brood War worked, seem more plausible. I can honestly say I devoured Firstborn (I read about 300 of its approximately 350 pages today) and loved every minute of it. I can't wait to see what happens in Shadow Hunters tomorrow!!!!
Posted by Shauna at 12:34 AM