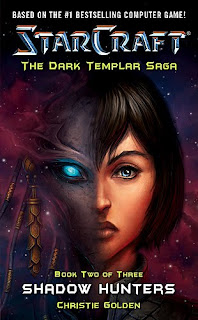 A few minutes ago, I finished book 2 of Christie Golden's The Dark Templar Saga. Shadow Hunters picks up where Firstborn left off, but this time pretty much everyone has found out about Jacob Ramsey and the Protoss in his head. Kerrigan sends her forces, who mistakenly capture the wrong guy. The Heir to the Terran Dominion continues to pursue, sending his personal ghost into the fray. And Ulrezaj, an archon made up of seven dark templar is also after Zamara. Jacob and R.M. Dahl are hard pressed to stay ahead of everyone.
Following Zamara's directions, the pair makes their way to Aiur, where they discover the few remaining Protoss have been split into two opposing camps. While they are able to befriend the Shel'na Kryhas (Those Who Endure), the Tal'darim (the Forged) are bitterly opposed to the Shel'na Kryhas. And unfortunately, the Tal'darim are right where Zamara, Jacob and R.M. need to go.
Shadow Hunters was just as good as Firstborn. Like the first book, I didn't want to put it down. Unfortunately that wasn't possible, so it took me a bit longer than planned to read. But that doesn't matter. I can't wait to see how everything plays out in Twilight, and I can't wait to see what Zamara's been hiding.
Posted by Shauna at 11:58 PM