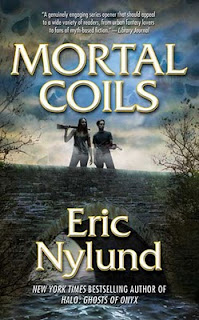 I was standing around in Chapters, talking to a couple of friends when Mortal Coils caught my eye. It is written by Eric Nylund, who also writes some of the Halo novels (which I have not yet read). It sounded intriguing, so I decided to buy it.
Mortal Coils tells the story of the twins Fiona and Eliot Post. They live with their Grandmother and Great-Grandmother in a house full of rules. Nothing exciting has ever happened to them, until they turn 15. It is then that they begin to discover the truth about themselves. As the children of a Goddess and Lucifer, the Prince of Darkness, they are tasked with three heroic trials by their mother's family to determine whether they belong with the Immortals or the Infernals (their father's family). Discovering the twins' existence, the Infernals also devise their own tests in the form of three temptations. The twins need to survive these tests by ultimately discovering their own powers and strengths. But much more is at stake than just their lives, for Fiona and Eliot may be the key to starting a war between the Immortals and the Infernals.
I was excited when I found Mortal Coils in Chapters, but while I was poking around on Eric Nylund's website, I discovered that it is not a stand-alone book, like I expected. The next book is due out this summer. Normally I would wait to read a book in a series, having learned several years back that I do not remember everything that happened in previous books (this was from reading Terry Brooks' High Druid of Shannara series. I thought I remembered everything that happened, but when I opened the second book, Tanequil, a year after reading Jarka Ruus I was completely lost as to who the characters in the first chapter were!). Unfortunately I discovered All That Lives Must Die as I was in the middle of Mortal Coils so I chose to keep going.
Mortal Coils was also a bit hard to read at first. The main problem was that it had footnotes all over the place; the footnotes reminded me of a school book, even though they provided mostly fictional information. This made Mortal Coils a poor choice for my first non-school book of the summer. Luckily it was still an excellent read, especially at the end, as Fiona and Eliot really began to assert their own authority. Overall, Mortal Coils was great, filled with wonderful ideas and characters. I can't wait for the next book!
Posted by Shauna at 12:20 AM