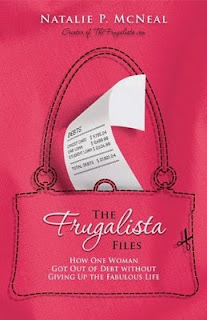 I have just finished reading my first entire book on my Kindle! And I have to say: it is awesome to read on! :D
I found The Frugalista Files while browsing through the Superstore's book selection. Rather than buying it, I decided to see if it was available on the Kindle Store. I was super excited when it was - I saved a few dollars in true Frugalista style! ;)
The Frugalista Files tells the story of a pivotal year in Natalie's life. At the beginning of the year she was $20,000 in debt. Employed at the Miami Herald, she was unhappy with her job. So she decided to turn her life around. She took a vow of frugality for the month of February in which she would not spend money frivolously. And she pitched the idea of blogging about her experience to her paper's editors. And thus Frugalista was born!
Her blog was such a success that she kept it going after February. Over the remaining months of the year, she stayed smart about her money, whittling her debt down to about $14,000 by the following January. But on top of that, becoming a Frugalista made her take a serious look at other aspects of her job. Eventually she gained the courage to strike out on her own, becoming a freelancer and promoting her brand full time.
Natalie's book was a lot of fun to read. She has her own unique voice that really came through. And while I can't even imagine living life like she did (my city isn't the party or shopping-central that Miami is), I even learned some great tips for a more frugal life! Thanks Natalie! :)
Posted by Shauna at 2:00 AM