School Book: The Tragedy of Mariam 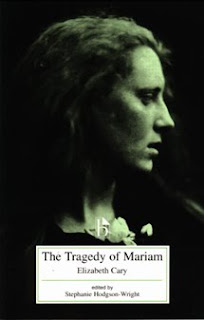 I haven't really felt like reading any school books lately. But I buckled down and actually read The Tragedy of Mariam earlier this evening. It was a short read, which was great. Some of the speeches were a bit long and there were a few places where I wasn't altogether sure what was happening, but it was an okay read.
The basic story (spoilers!) is that the king, Herod, is presumed dead by his people and his queen, Mariam. This turns out to be false, leaving many people, Mariam included, rather unhappy. But Herod's sister, Salome, turns this to her advantage, getting rid of her unwanted husband and her sister-in-law to boot. In the end Herod realizes his mistake: Mariam was not untrue to him. But unfortunately it's too late, as he's already put her to death. The argument, which is right at the beginning of the play, gives all of this away, which was why I didn't feel too bad repeating it here.
The really interesting thing about this play is that it is what's known as a "closet drama." It was written by a woman in the 17th century. It was intended to be read by her friends and herself; it was not intended for publication. I thought that was pretty fascinating as we always hear of the male playwrights of the period (like Shakespeare, Middleton and the like), but no females. For that reason alone, this is worth a read.
Posted by Shauna at 3:31 AM