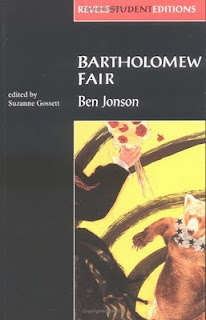 Today I read Ben Jonson's Bartholomew Fair. I didn't really feel like reading it, but now that I have I can work on other things tomorrow (and sleep in! I'm super tired right now!)
But that being said, Bartholomew Fair was a pretty entertaining read. It was a bit hard to follow at times (particularly when one of the characters started speaking in stage-Scots). But the characters were all pretty funny. Like most of the other plays I've read so far for Sex, Gender and the Early Modern, Bartholomew Fair was a city comedy, so it shows the citizens engaged in daily life (although you can't take this as a depiction of accurate daily life for the Elizabethan/Jacobean people).
Bartholomew Fair tells a strange tale about marriage and courtship. A widow will only marry someone who is mad. A young gentlewoman is supposed to marry a rather childish man, but would prefer to marry anyone else. These people are all running around the Bartholomew Fair, encountering prostitutes and cutpurses.
As I said, it's an entertaining read. If you're looking for something a bit different from Shakespeare, definitely give Bartholomew Fair a try!
Posted by Shauna at 3:22 AM