Batman: Whatever Happened to the Caped Crusader 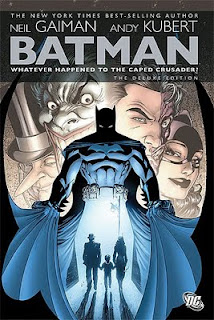 I took a bit of an Ever World break in favour of some Batman; I'll be writing a column for work on books in the near future with Batman as my chosen topic so I thought I should read one or two more before it's due. I was also in a Neil Gaiman kind of mood so Whatever Happened to the Caped Crusader was perfect.

The main story was really interesting. Everyone whom Batman touched, both friend and foe, were gathering for his funeral. And everyone was telling stories of how he both lived and died. Unfortunately these stories were all extremely different, leaving you with no real idea as to what was the truth. And over it all, the Caped Crusader himself watched, invisible along with a mysterious other. Whatever Happened was, in true Gaiman style, very intriguing; a fun read that leaves you trying to solve the mystery of what's going on right along with the Bat.

My version was the deluxe edition, which included a few other tales There four stories were all in widely differing art styles. It took me a bit to realize that they were also written by Gaiman. The first one, "A Black and White World," was pretty fun, featuring Batman and Joker rehearsing and acting out their roles for the comics; here they are just two guys who chose a career as comic book actors. "Pavane" was a strange story featuring Poison Ivy. It was a little hard to figure out (and, in my opinion, the worst story in this edition). Finally, "Original Sins" and "When is a Door" were related. "Original Sins" is the story of a man wanting to film a documentary on the human side of the villains; he is visited by Batman, who warns not to proceed. "When is a Door" is the interview of the Riddler. It was a bit confusing, but that was okay, because you do not go to the Riddler for answers. While not my favourite, this tale had the best ending.

All in all, I enjoyed reading Whatever Happened to the Caped Crusader. This was by no means my favourite Batman graphic novel (or my favourite Gaiman stories), but altogether this was entertaining and makes you think.
Posted by Shauna at 3:11 AM