Ever World: Land of Loss 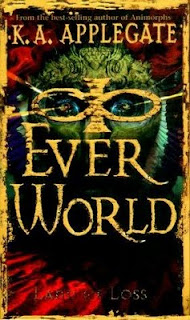 Well, my suspicions were correct: Ever World is a lot like Animorphs. Not the subject matter or anything. But the whole idea that it's a group of teenagers. And every book is narrated by a different one.

Land of Loss picks up right where Search for Senna leaves off: the vikings are battling the Aztecs (although now you get Christopher's narration rather than David's. If you're familiar with Animorphs, Christopher is rather similar to Marco). And all I can say is that these are the luckiest kids ever. They not only survive Loki's keep in Search for Senna, but now they have to deal with their team (aka the Vikings)losing to the Aztecs. And yes, they somehow survive. But now they are left wandering in the jungle outside of New Tenochtitlan (the Aztec city). They encounter some alien people (the Coo-Hatch) who have also been brought into this world; unfortunately, the Coo-Hatch have been here for 100 years and have yet to find a way home. And so their story continues as they try to survive in Ever World.

While Land of Loss had a different feel from Search for Senna, I still found it hard to put down (although I much preferred the narration of David over Christopher).
Posted by Shauna at 9:45 PM