Ever World: Gateway to the Gods 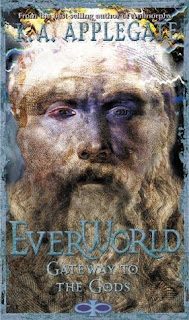 I have finally started reading the Ever World books I got from the library! The first one is of course Gateway to the Gods which is narrated by April. The group managed to save Dionysus (but they were unable to save Ganymede) from the Hetwan and have made it to Olympus. Christopher, as promised, is offered immortality (although he turns it down because he feels he owes Ganymede a debt which cannot be repaid). The rest are promised immortality should they defeat the Hetwan who are even now surrounding Olympus. And so David jumps up to the task, becoming the general like Senna had predicted back in Search for Senna. The problem the Greeks face is multiple: the Hetwan greatly outnumber them and they have no central figure to rally around. They're also fighting war without the centuries of innovations the real world has experienced. So David is able to bring his knowlege of the 21st century in to help the Greeks succeed and save Olympus (and more importantly their gods) from the Hetwan.
Posted by Shauna at 1:29 PM