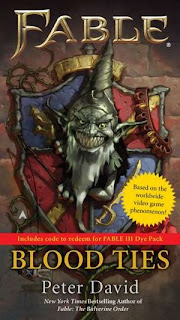 I recently went to Chapters with the express purpose of buying the Cowboys and Aliens graphic novel. I had a gift card left over from Christmas, and after really enjoying that book I decided I wanted to add it to my collection. Unfortunately, when I got to Chapters I discovered that they had their "buy 3 get the 4th book free" deal on. And as I started browsing, it became obvious there were four pocket books I'd like to get with that deal. So Cowboys and Aliens went back onto the shelf for another day, and instead I bought four books I've never read. Fable: Blood Ties was one of those four books.
After enjoying Fable: The Balverine Order, which was also by Peter David, finding Blood Ties was extremely exciting. I had no idea a new Fable book had been written. And unlike The Balverine Order, which was about some new characters, Blood Ties featured a couple of characters right out of Fable 3 (from the back of the book: Ben Finn and Page; while not mentioned on the back, Reaver is also in it). Finn is one of my favourite characters from Fable 3 (my most favourite is Reaver; he's so funny to listen to!) so naturally I was excited to read a book completely about his adventures after the game.
Blood Ties is a rather strange tale. Finn decides to leave Bowerstone and asks Page to accompany him; she refuses. So off Finn goes looking for adventure. He almost gets himself killed but is saved by a gnome (they appeared in the game and hurl insults at passerby's). After vowing he will not kill the gnome, the gnome decides to follow Finn around, insulting him and just generally making life miserable. Finn finds his way, gnome in tow, to a town that's under siege from a warlord. Unfortunately the warlord is the least of the town's troubles when
beast men show up. After this alarming discovery, Finn tracks the beasts down to their source and makes a virtual deal with Albion's entrepreneur devil Reaver. Blood Ties is told completely from Finn's perspective, which was quite a lot of fun.
Unfortunately, despite the great premise and my excitement over the characters, Blood Ties was a pretty slow read, particularly during the first half of the book. I don't know why, but I found myself not really caring about most of what was going on. It was honestly only when Reaver appeared to up the stakes that things picked up, but I still had a hard time wanting to sit down and read. In that regard I was rather disappointed; I loved reading The Balverine Order (well except for the premise - that needed a bit of tweaking in my opinion) and was expecting a similar reading experience from Blood Ties. Don't get me wrong, the story of Blood Ties was good and I'm quite glad to have read it. But it wasn't nearly as good at The Balverine Order was.
As a side note, the weapon code of The Balverine Order is a better draw than Blood Ties' dye pack. I don't know if I'll even bother redeeming the dye pack because I really don't care. My draw for buying Blood Ties was completely based off my expectations of Peter David's work.
Posted by Shauna at 1:01 AM