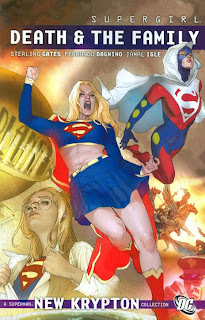 I apologize. This is full of spoilers.

It's been a realy busy week. I started reading The Help, but then work got a bit crazy and I haven't had time to finish it. I wanted to read something on a coffee break yesterday, and not wanting to get back into the Help then have to put it aside again, I decided to read one of the graphic novels I randomly picked up. I chose Supergirl: Death & the Family thinking that I haven't read a Supergirl title in a long time. The last ones I read don't even appear on this blog! I looked back in my library reading history; I read three in 2007, inclusing Superman Batman: Supergirl, which was so good that I went out and bought it! I was also a fan of the 1996 series, having bought the first twenty or so issues before my local comic store closed on me. One of the graphic novels I read in 2007 just happened to collect the end of that series. I'd like to get the rest of the series one day because it was really good.

Anyway, enough of that tangent. My point is that I haven't read a Supergirl story in a long time. Unfortunately that really showed while I was reading; I had a few moments where I was really confused as to what was going on. It doesn't help that Death & the Family was volume 8, a fact that I only found out online after actually reading the story.

Despite having no idea what was going on, Death & the Family did a pretty good job of bring me up to speed. There was a whole chapter that explained what happened with one character (Lucy Lane) which was really interesting. Her character didn't have a whole lot to do with the main storyline, but it was still really interesting (and a good set up for the future).

The main story had to do with Supergirl having to hide her identity because Earth is now very anti-Kryptonian (that was one thing I'm not really sure about. But it sounds like it's a big long storyline that I might look into in the future). In the meantime, Supergirl finds out that Lana Lang, the woman she's been staying with, has some kind of strange disease that no doctor can diagnose. Supergirl goes off to battle the Silver Banshee (who happens to be a character I know about - Silver Banshee was in some of the early editions of the 1996 comic) but finds out too late that Lana died from her infection. Then in a typical "Comics are Weird" moment (thanks Movie Bob), it turns out some alien bugs were infecting Lana and they took over her now dead body. In a matter of days they have a huge hive in the centre of Metropolis and plan on taking over the world. They trapped Supergirl somehow (this is when she first discovers the bugs, but it's never really shown what exactly happened to her), so some guy shows up and frees her. Supergirl then battles the Insect Queen (who she apparently dealt with before), and with the help of some a superhero doctor, they force the Queen out of Lana's body, bringing her back to life (minus the extra arms the Insect Queen has). The story ends when Supergirl gets mad at Lana for lying about the disease, storming away saying she doesn't want to be human if that's how humans treat one another. It was a touching moment in its way, showing how Supergirl is learning and I apologize for butchering it here.

So all in all, Death & the Family is an interesting story. But I think you'd be a lot better off reading all the other volumes first.
Posted by Shauna at 5:23 PM