Library Book: Jurassic Park: The Devils in the Desert 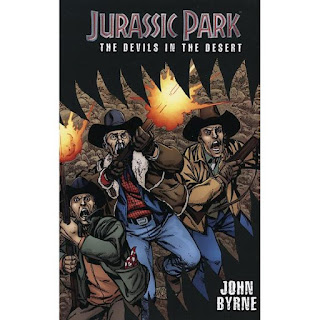 Around the same time that I found the Supergirl graphic novel at the library, I also found one from Jurassic Park. I decided to start reading it this afternoon and finished it when I got home from a friend's. Unlike Death & the Family, Jurassic Park: The Devils in the Desert was a one shot graphic novel where you only need a basic understanding of the Jurassic Park world.
Basically, some pteranodons migrated to southern California from one of the two islands where they were created and it's up to the local sheriff, a FBI agent and a paleobiologist to stop them from terrorizing the countryside and killing people.
The Devils in the Desert was a good story. I really liked the characters and the human drama that was happening among the dinosaur stuff. If you want a good, quick, easy read that's full of dinosaurs, this is definitely the book for you!
Posted by Shauna at 1:20 AM