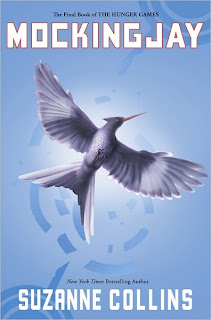 So I did it again. I finished Mockingjay in one day. I told myself I wasn't going to, but as I was reading, I just didn't want to put it down. At this point I just wanted to know how the story ended.

I'd like to take this moment to give another spoiler warning. Now that I've read all three books, I will be saying things that give away earlier plot points. I'd also like to discuss Mockingjay in more detail than I've done for the other two books. So if you haven't read the trilogy yet, you might want to stop reading.

As an aside, the first two paragraphs of this entry were writtem on my Kindle. I switched to my laptop for ease in typing and formatting. But now I know I can write a blog post on it if I ever need to!