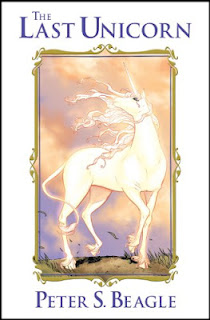 I don't really want to say a whole lot about The Last Unicorn. I've never read the actual novel by Peter S. Beagle, but I was a big fan of the movie when I was younger. I found the graphic novel in Chapters a few weeks ago and immediately fell in love with the art. The library has it, so I took it out a little while ago and finally got around to reading it. The graphic novel is relatively similar to the movie (which makes sense - Peter S. Beagle wrote the screenplay, and was involved with the graphic novel so they should be similar). But I just can't get over that artwork!!! (If you're curious, I found a sample of the art here).
If you're unfamiliar with the tale, it is the story of a unicorn who believes she is the last of her kind. So she sets out on an adventure to find out what happened to the others. The Last Unicorn is full of wonderful characters like Schmendrick the magician, who has power but isn't very good at casting spells, Molly Grue, the first woman to actually see the unicorn for who she is, and King Haggard, the cruel man who commands the Red Bull. The Last Unicorn is a wonderful tale that has captivated people around the world.
Posted by Shauna at 12:03 AM