Wonderful Alexander and the Catwings 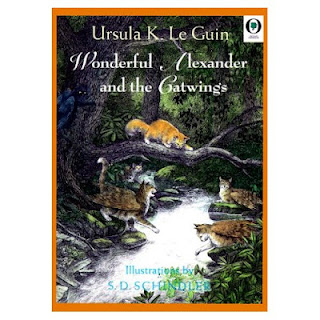 Wonderful Alexander and the Catwings is the third Catwings book by Ursula K. Le Guin.  As I mentioned in my last post, it was one of the two Catwings books I have never read.  I'm really glad I finally got a hold of it!

Alexander Furby lives in a big house with his family.  The oldest of three kittens, he decides to go exploring the world outside his garden.  Alexander nearly gets run over by some trucks on the road, then finds himself up a tree after being chased by some dogs.  He miserably spends the night, too terrified to climb down.

The next morning, a strange black cat with wings finds him.  Unable to speak, she manages to coax him down the tree and leads him to her home where he meets the other four catwings.  He learns that Jane, the black catwing, has never spoken and refuses to sleep in the dovecote with the others.

Susan and Hank, the children who care for the catwings, see Alexander and take him in.  That's where his original owner finds him.  Alexander remains with Susan and Hank, but now gets to see his parents when they come for a visit.

Alexander has a good life, but he always thought he would do something wonderful.  One day when he is reflecting on things, he realizes that Jane is the one who has done wonderful things - namely helping him down from that tree.  He decides he wants to do something wonderful for her, but what can he do for a cat with wings?

To avoid spoilers, I won't tell you; you'll have to read the story yourself!  That being said, I really enjoyed this book.  I wasn't sure what I would think of it, especially when it started off following Alexander (it isn't until chapter 2 that Jane shows up), but it more than made up for it in the end.  It was also great seeing more of Jane (and I'm sure I'll get even more Jane in the final book, Jane on her Own).

This is a beautiful story about the friendship between two cats.  If you're a fan of the first two books, you'll enjoy this one.
Posted by Shauna at 3:50 AM