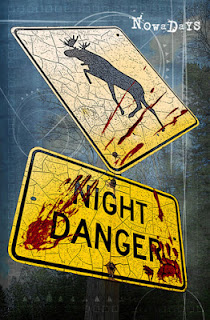 I have to admit, I had a hard time getting into the story.  Most of the problem in the early pages was due to editing errors (there were a couple of words that I really had to puzzle out because they were misspelled), but it also took awhile for the story to focus.  I mean, it started out with Brendan, so I thought he was the main character.  But then it took off from Brendan and stayed away from him for quite awhile.  Once the story came back to him, he clearly wasn't the focus either.  So things were a bit confusing until closer to the end.  But if you do give Nowadays a try, definitely stay with it.  I did, and I really ended up enjoying it.  It took some twists and turns that were fun, had some great characters, and I'd definitely be interested in more.
Posted by Shauna at 8:07 PM