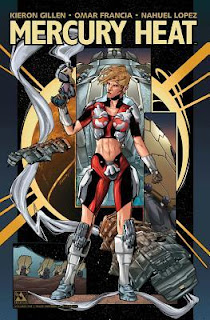 And here's one more from the library: Mercury Heat.  I saw this go by several weeks ago and was really intrigued by the premise.  Mercury is ridiculously hot on it's sun-facing side, and ridiculously cold on the other side.  Between the two there's a temperate zone where it's right around Earth-temperatures.  So Mercury has been colonized by a nomadic workforce who has to keep moving to stay alive.  They're building solar panels to trap the sun's energy, which is then transported to Earth.

Meet Luiza Bora.  Her personality-type, 57B, made her dreams of being a police officer on Earth impossible.  So she's moved to Mercury.  Her first assignment is to investigate the death of someone.  It could have been an accident.  But as more and more people try to kill her the more she investigates, it suddenly strongly smells of murder.

If you like a strong, sensibly-dressed female-action hero and aren't offended by seeing people's heads kicked in, Mercury Heat is for you!  I honestly can't wait for volume 2!
Posted by Shauna at 8:13 PM