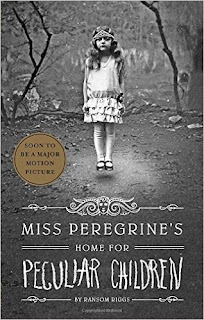 Knowing that Miss Peregrine's Home for Peculiar Children is going to be a movie soon, I got it out from the library at the same time as The Happiness Equation.  Both books had holds, so I decided to return Miss Peregrine and buy it on my Kindle instead (because it was the cheaper of the two on Kindle).  Of course, right when I returned it I discovered there actually weren't any holds on it anymore and I could have had it out for longer.  C'est la vie.

Miss Peregrine's starts out with a prologue where protagonist Jacob talks about the stories his grandfather used to tell about his childhood growing up on a mysterious island in Wales before going off to fight monsters.  According to his grandfather, the other children there all had peculiar talents.  Like the girl who could levitate.  Or the boy who was invisible.  He even had pictures to prove it.  But as Jacob got older, he stopped believing his grandfather's tales, especially when he found out that his grandfather had literally been fighting monsters - the Nazis who killed his family.  But then Jacob goes to his grandfather's place to find him dead in the back, torn apart by a literal monster.  Jacob is the only one who sees it and is deemed crazy (his grandfather must have been torn apart by wild animals, wasn't there a pack of dogs attacking someone last week?)  A series of coincidences happen which send Jacob to the island of his grandfather's youth, trying to find answers from the past.  And he finds more than he bargains for in the war-torn house that remains.

Miss Peregrine's was a somewhat hard read to get into at first.  I found myself wishing things would move along quicker more than once.  But after Jacob finds the Peculiar Children, things definitely speed up, making it difficult to put this book down.

The Peculiar Children were interesting, but I have to admit I had a hard time remembering who was who outside of the main three or four.  You had Emma who could light things on fire.  Enoch, who could reanimate dead tissue (or animate inorganic tissue).  Bronwyn who is super strong.  And Millard, the invisible boy.  There were a few other children mentioned repeatedly (Olive, Claire, Fiona, and Hugh) but I had a hard time keeping them straight (especially the girls).

Oh, I should mention Miss Peregrine herself, too.  She can change into a bird (in her case a peregrine falcon) and control time.  She keeps the time loop that the peculiar children all live in going.  Basically one day loops over and over again, keeping them all safe from the monsters who are after them. And, you know, safe from the ordinary people who won't understand them.

I want to add that the set up really, really reminded me of X-Men.  You had Miss Peregrine as a stand-in for Professor X, with a school of mutant children.  Just saying.

All in all though, I did enjoy reading the book.  I was sad that it ends at a spot that leads directly into book 2.  I wasn't sure if I was going to keep reading the series or not, but supposedly book 2 is better than book 1, so I just bought it on my Kindle, too.  Hopefully it will be!

Oh, I forgot to mention the pictures.  The book has lots of old-timey pictures showing the various characters.  That made it a whole lot more interesting to read!
Posted by Shauna at 1:40 PM

I should add: there's a really fun interview with Ransom Riggs at the back of the Kindle edition of this book. He shares some more pictures that didn't make it into the book and talks about how the pictures influenced the story.