The Wicked + The Divine Volume 1: The Faust Act 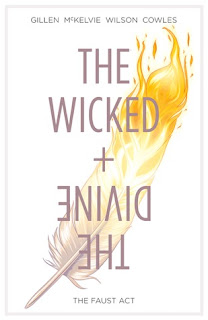 Continuing the graphic novel craze I have been going through (and unwittingly continuing reading stuff by Kieron Gillen), I've just finished The Wicked + The Divine Volume 1: The Faust Act.  I actually found the very first issue of The Wicked + The Divine in my comic box (I think I got it for free from my comic shop) and read it a few days ago.  I was super happy to see that the library had Volume 1, which meant I was able to read a bit more and see if I like it.  The very first issue was enough to interest me, but it wasn't enough to really explain what was going on.

In this world, every ninety years twelve gods come back.  They live for two years and then they die.  In the modern day, the gods are superstars for those two years.  And Laura is their biggest fan.

She wakes up after a concert and finds herself face to face with Luci.  Luci, who just happens to be Lucifer, the God of Lies.  Lucifer brings Laura backstage to meet the others, who are giving an interview.  When snipers attack them, Luci uses her divine power to deal with them, landing her in the mortal courts.  While sassing the judge, his head explodes in much the same way that the snipers' heads had (what is it with Gillen and exploding heads???)  So Laura, convinced that Luci is innocent, sets out to find the real murderer.

Yes, this is ridiculously intriguing.  Apparently Mercury Heat was not a one-off; I find myself a very big fan of Gillen's writing.  I'll be looking for the next two volumes of this series (and volume 4 is coming out in the fall!!!)
Posted by Shauna at 1:43 PM